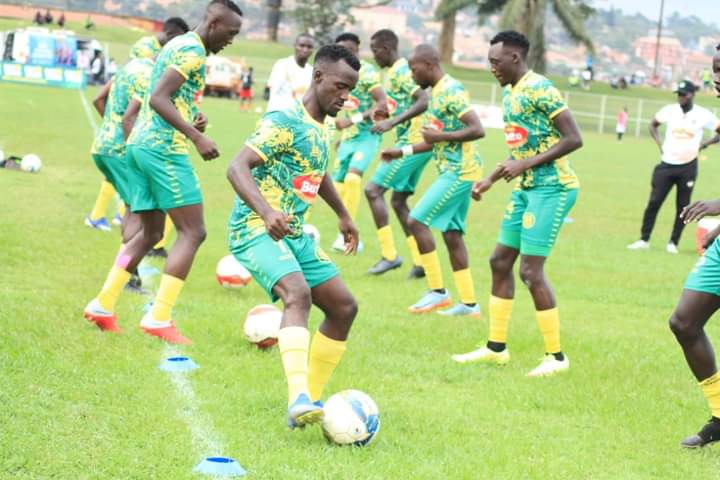 Preview: BUL Seek To Bounce Back In Jinja Derby

Eastern Giants BUL will be seeking to bounce back when they play host to struggling neighbors Busoga United in Busoga derby at FUFA Technical Center in Njeru.

BUL are coming into this tie at the back of a 1-0 defeat against Express in their last game 16 days ago, a result which ended their unbeaten run of the season.

They are second on the log with 14 points, four points adrift of leaders Wakiso Giants who have played a game more.

So, another slip shouldn’t be an option for a side which would love to keep themselves in Title contention conversation.

They are still unbeaten at home and have had two weeks resting period since their last league game.

On paper, BUL will fancy their chances to pick maximum points especially against a side that hasn’t registered a single point away from home.

BUL’s attacking duo of Karim Ndugwa (4) and Richard Wandyaka (4) have more goals than the entire Busoga scored (5) this season .

“We are going to give our level best not because we want to go back to the top of the table but because we need to get the three points,” BUL Coach Alex Isabirye said ahead of the derby.

“There was some pressure when we were on top because many players didn’t know how to behave while there.

“But we have got some experience and if we go top again, I think we now know what to do and I believe they will manage the pressure this time.”

For Busoga on the other hand, they will be looking forward for a breather away from their many struggles.

They are visiting a rival at the back of a forfeited loss against Express after those ugly incidents at Kakindu in a match that was abandoned in added time due to hooliganism.

After conceding a late goal, Busoga fans protested violently in protest against referee decision which led to Allan Kiyiwa’s freekick goal, they started pelting stones onto the playing field which forced police to intervene with teargas.

And the FUFA disciplinary committee based on that to hand Busoga a 3-0 loss by forfeiture.

The Club has since dropped back to red zone, in 14th position.

They are yet to record a single point away from home, however they visit a familiar venue, having used it as their home ground for almost a half of last season.

Busoga United captain Derrick Basoga said that the FUFA decision just made them stronger instead and they are going to be more focused and hungrier.

“The team is focused amidst loss of 3 points from Express, so we are coming stronger and hungrier for the points.”

The last time Busoga visited BUL, they were humbled to a 5-0 defeat courtesy of Ibrahim Nsimbe’s hat-trick, Musa Esenu and Richard Wandyaka goals.

This is going to be their 13th league meeting, with three wins each.