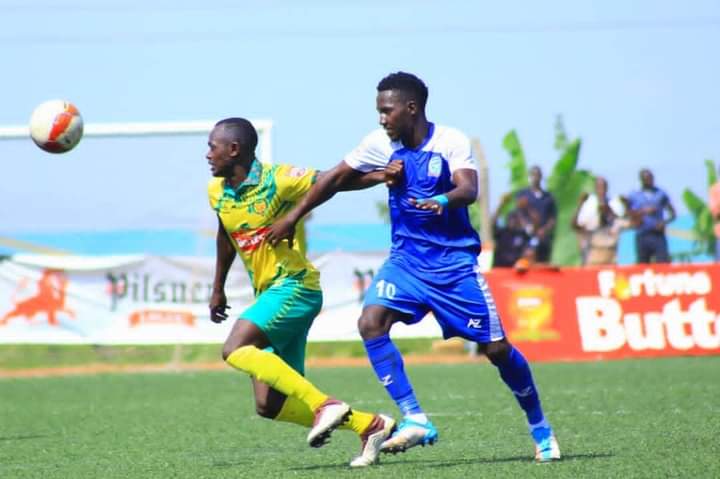 BUL returned to winning ways with a 2-0 win against Busoga United to take Jinja derby bragging rights in a UPL game played at FUFA Technical center in Njeru.

Karim Ndugwa flicked in a beautiful header to break the deadlock in second half before Ibrahim Mugulusi scored a stunning blockbuster to make it 2-0.

Coming from their first defeat of the season, Alex Isabirye charges composed themselves to keep their unbeaten home run intact and also maintained pressure on table leaders Wakiso Giants.

With a game in hand, the Eastern Giants are second with just a point below Wakiso Giants who are on 18 points.

For Busoga United who gave their all before defensively lapses, stumble to their 7th loss of the season and stays in drop zone with only 3 points.

It was a silent opening in terms of chances as both sides lacked that clear cut pass to create a breakthrough.

The Visitors had the first threat when Nicholas Mwere’s freekick in the first minute kissed the woodwork.

BUL nearly responded with a goal in 9th minute but Ibrahim Kazindula’s freekick was denied by a spot-on Micheal Lutaya before again denying Jerome Kiirya towards the break to force a barren first half.

Moses Logono proved too casual in the first chance of second half when he decided to take a very weak and poor shot, to deny Busoga United an opening.

In the 65th minute, Ndugwa broke the deadlock with a beautiful header in the far top left corner off Ronald Otti’s freekick.

Six minutes later, Mugulusi doubled BUL’s lead with a beauty, a blockbuster from outside the box after being set by Martin Aprem to beat Lutaya in the same position where Ndugwa’s header notched.

In added Time, Busoga captain Basoga Derrick made a goalline clearance to deny Hillary Onek from what would be the third goal of the game.

BUL will visit Bright Stars in their next fixture on Tuesday, November 29 while Busoga will come back in action next month on 5th to play the same Bright Star.