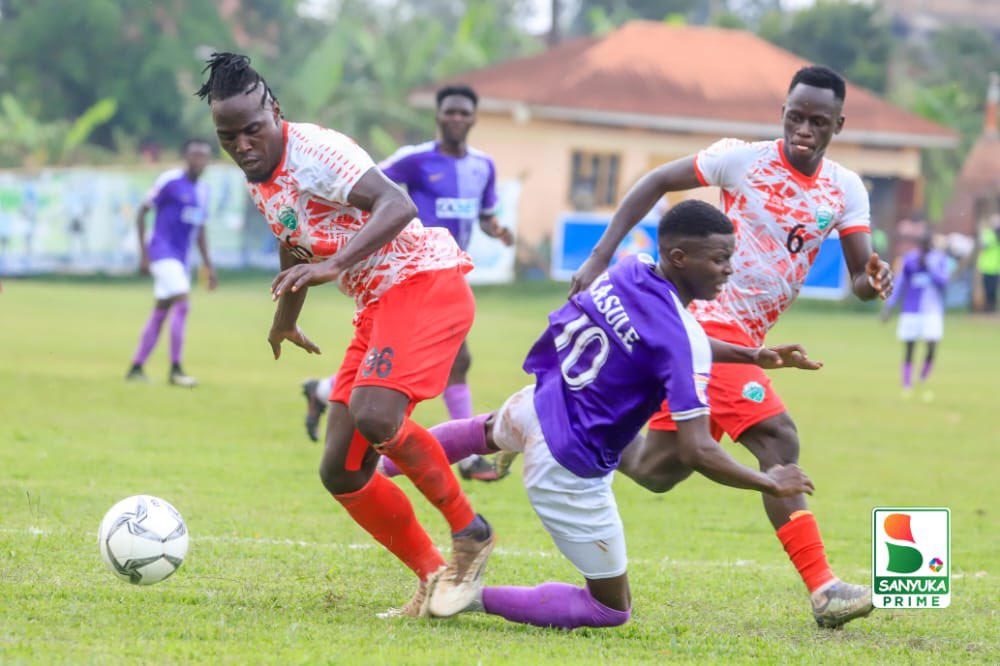 Goals from Shariph Kimboowa and Rahmat Ssenfuka were enough to guide the Purple sharks past Gaddafi.

Wakiso Giants dominated the game as usual with their short passing style of play but they failed to penetrate a well organized Gaddafi FC defence in the opening minutes.

In the 22nd minute, Nicolas Kasozi made a blunder with a short pass back to the goalkeeper gifting Shariph Kimboowa with a keeper-to-beat chance but Joel Mutakubwa played better to punch out a close shot.

Gaddafi saw their first clear effort on goal fall to John Byamukama when he dodged past Grant Matsiko but his powerful shot went over the crossbar.

And minutes later, the Purple Sharks got a breakthrough from the spot.

Winger Lwesibawa brought down Owen Kasule in the box for the referee to point to the spot.

The penalty was received with protests from the Visitors, with coach Wasswa Bbosa entering the field of play halting the game to stop for about five minutes, before he was booked.

The referee resumed play and Shariph Kimboowa converted from the penalty mark to put Wakiso in a 1-0 lead in the 44th minute.

Gaddafi came back stronger in the second stanza as they created more goal scoring opportunities but they failed to show calmness in front of goal.

Lwesibawa had a chance to level the scores but his free kick was punched away by Samson Kirya and the rebound was dealt with by the defenders for safety.

The visitors kept on pilling pressure to Wakiso Giants as they played in the opponents half for the most of the game.

In the 77th minute they were caught at the break – Moses Aliro started a counter to find Kasule who set him up for a shot which was saved by Mutakubwa before Rahmat Ssenfuka converted the rebound to double their lead.

Wakiso Giants played so hard to defend their 2-0 lead and remain unbeaten at home.

They move top of the log with 17 points from eight games played.

Gaddafi FC have now succumbed to their second loss in the league with the other coming against SC Villa.