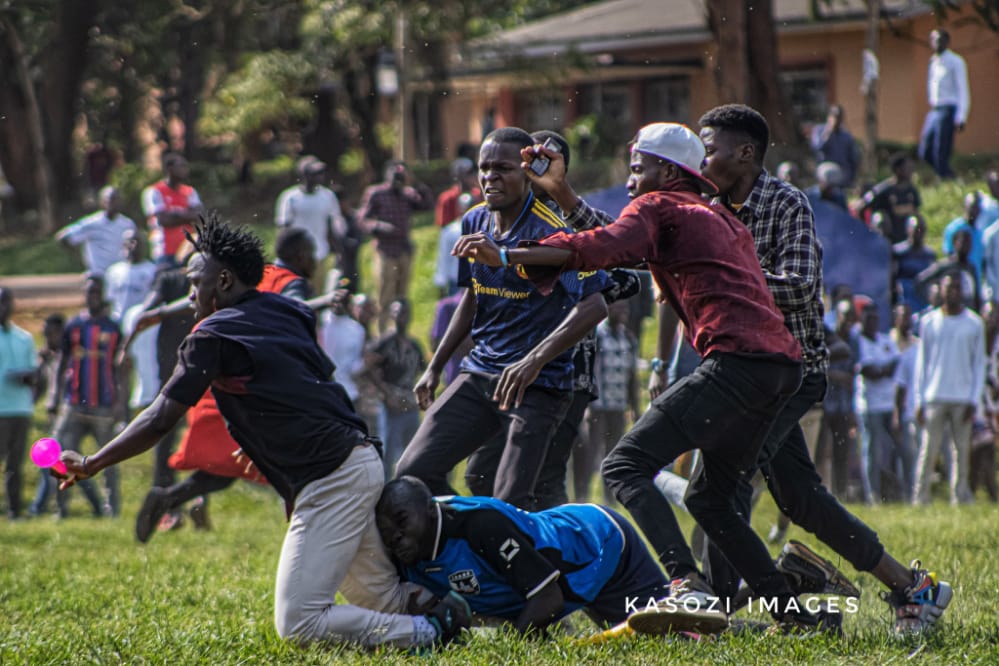 The game ended 3-0 in favour of St. Lawrence University thanks to goals from Micheal Kayongo, Bruno Bunyaga and Fahad Aniku.

But there was hooliganism that sparked off immediately when St. Lawrence scored first through Kayongo, who headed in home off a well taken corner from Umar Kayemba.

While St. Lawrence University fans went into wild celebrations, a one “Akena”, a Mubs fan, was engaged in a fight with one of the visitor’s fan and that sparked off the collision between all fans from both ends.

And after the fight, Akena got injured on his eye, sat in the middle of the stadium and the game had to stop for over 20 Minutes.

It needed Police’s intervention with tear gas to chase away the hostile Mubs fans and put everything back to order.

Later on, the game resumed with security tightened to calm down the angry fans.

The hosts, Mubs, who had already conceded one tried to stage a come back but Odong Arnold and Marktoum Yusuf missed when in-front of goal.

After the break, Bunyaga doubled his side’s lead, sending a powerful shot that beat Mubs goalkeeper Tumusiime David. His goal is his 12th in this competition and the current top scorer.

Aniku put the icing on the cake with third in the 79th minute, heading in home off a well taken free kick from Abura Michael.

And that was the last nail to the Mubs team, that lacked enough ideas Infront of goal throughout the entire game.

The win ensured that SLAU reached their second final in a row and advanced 5-1 on aggregate. They lost to UCU in 2019 in the finals at Lugogo and will fancy their chances this time round.

In the finals that are slated for 12th this month at Lugogo, St. Lawrence will now face Uganda Martrys University, who earlier on ejected defending champions UCU last week.

For Mubs, they will play UCU in the third place offs game but a ruling from the University football league competitions department awaits them following Tuesday’s un sporting events from their fans.