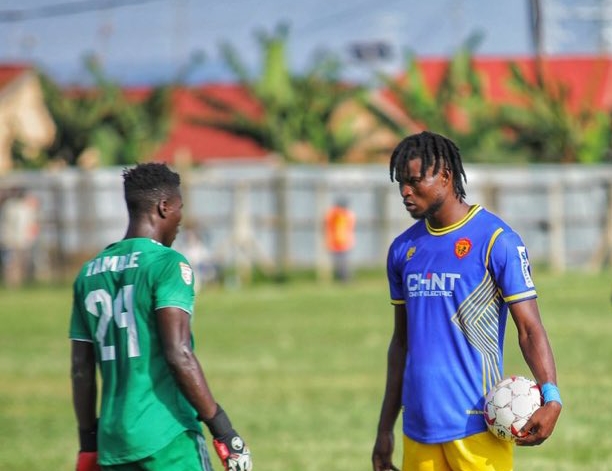 KCCA FC coach Morley Byekwaso has defended his striker Simon Tshisungu Kankonde after the Congolese missed from the spot at Luzira.

KCCA went on to lose the game 1-0, with Fred Amaku scoring the only goal of the game as Maroons stunned the 13-time champions.

Striker Kakonde missed a glorious opportunity to put KCCA FC ahead in the first half when he sent his kick over the bar.

“Kakonde is a good penalty taker and he was more confident than the rest of the players on the field but that’s football sometimes you score and sometimes you can miss,” Byekwaso said.

But the big question was if Kankonde is the Club’s first penalty taker.

Byekwaso explained: “Julius Poloto is our first penalty taker but he was on the bench at that time and next in line is Moses Waiswa who always takes national team penalties but he wasn’t ready to take that one and Kakonde showed confidence.”

The Congolese striker joined the Club this season on a two-deal after stints with Etoile Jaune de Bukavu, AS Dauphin Noir de Goma, Union Sportive Tshinkunku de Kananga and Academie Club de Kananga, is yet to get off the mark.

Byekwaso is now under pressure again, after he had earlier got a reprieve when his side beat Vipers at Lugogo.

“It’s a huge setback losing to Maroons as we came into this game with full of confidence from the Vipers win,” Byekwaso said after the loss against Maroons.

“We played better and dominated the game but luck wasn’t on our side and the luck on the day is so important.

“We created a couple of chances but we failed to use them as our opponents just created two chances and they converted one, after the goal they started time wasting which worked for them because they walked away with a win.”

Byekwaso is now aware of the pressure both from the fans and the board as they head into their next game against Blacks Power at home.

“Our failure to use our chances affected us a lot and we now return to the previous problems of being on pressure like what we faced after the loss to Arua Hill.

“We have to go back and rectify our mistakes so that we can come back as a better side in our next game.”

KCCA FC are yet to win an away game this season having lost 3-1 against Arua Hill earlier.

They now sit in the 8th position on the log with six points from four games and are five points behind table leaders BUL FC who are on 11 points.

KCCA FC will return to action on Saturday 5th November against Blacks Power at Omondi Stadium in Lugogo.