UCU Out to Complete Job Against Uganda Martyrs 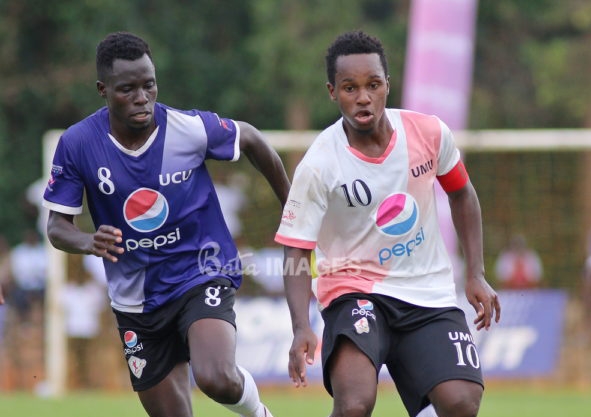 Uganda Christian University (UCU) will be seeking a successive final when they face off with Uganda Martyrs University Nkozi in the semi final return leg of the pepsi University football league.

The Mukono based university picked a 1-0 win over Uganda Martyrs in the first leg held in Mukono last week, courtesy of Isaac Oforywoth’s goal.

In that same game, goal scorer Oforywoth was shown matching orders but his goal made the difference on the day.

And in Nkozi, UCU, who are defending champions, having won it in 2019 when they beat St. Lawrence University will have sights on another final.

Their captain, Geofrey Gagganga is optimistic that his side has the potential to reach the final stage.

“I thank God for bringing us this far. As a team we are well prepared and ready. We won the first leg and we hope to do the same so that we can reach another final, Gagganga told the pressmen on Wednesday.

On Thursday, a draw or even a win will see UCU storm the finals, given then fact that they won the first leg while at home.

Meanwhile, the hosts, Uganda Martyrs will be seeking to overturn the result when the two sides meet at Nkozi.

The Nkozi based side suffered a 1-0 loss in the first leg at Mukono, leaving them with more work to do at home.

They will be without Kennedy Kasozi, who was shown red with three minutes to play in the first leg held at Mukono.

Their midfielder Masuud Kafumbe believes that their home advantage will guide them to victory.

“We have prepared very well. We know it’s a hard task since we are a goal down but we shall use the home advantage and storm the finals, he told the pressmen on Wednesday.

On Thursday, Uganda Martyrs as well wikk be targeting to reach the finals ever since 2017 when they beat Mubs 2-0 at Namboole stadium.

Against UCU, they face a defending champion but will also fancy their chances given the fact that they have ever won this title before.

The winner on aggregate will face the winner between St. Lawrence and Mubs who are also at the semi final stage.

St. Lawrence overcame Mubs with a 2-1 win in the first leg held at Kavule Mpigi this week on Tuesday. These two will meet again next week on Tuesday for the return leg at MUBS in Nakawa.