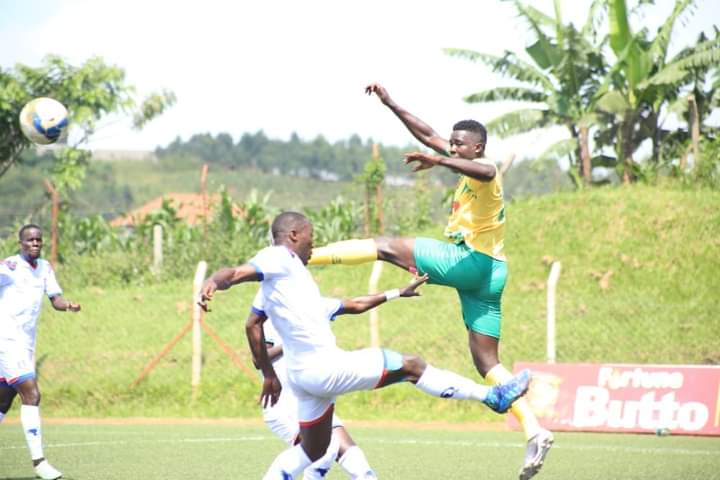 Richard Wandyaka scored a beauty late in the game to hand BUL an edge over resilient SC Villa at Njeru.

Wandyaka powered in a volley into the top corner in the 89th minute to spark wild celebrations.

The Jogoos had played cautiously throughout and were on course for a hard earned point as BUL had proved wasteful before Wandyaka decided the top-of-the-table clash.

And BUL extends their lead at the top with 10 points from four games while SC Villa succumb to their first loss of the season.

The Jogoos, who were by far the second best in the contest, remain on seven points.

After finishing fourth last season, Alex Isabirye want nothing but challenge for the title this season.

And four games into the season, few can doubt this team’s ability to go all the way.

Against SC Villa, it looked like the game was destined for a stalemate after Villa had put out a strong wall in front, and it had to take a beauty from Wandyaka to break the deadlock.

Wandyaka hit it with power and precision, to give Goalkeeper Martin Elungat who had not conceded a goal this season, no chance.

BUL had knocked on the door, with target man Karim Ndugwa coming closest including a volley that hit the bottom post before Ibra Nsimbe’s weak shot was easily collected by Elungat.

Nsimbe failed to connect on Ronald Otti’s inviting cross, while he earlier had a goal disallowed due to offside in the build up.

Wandyaka also came close with a rebound that went over the bar while his header deep in the second half was off the target as BUL asked questions.

Jackson Magera’s start as SC Villa’s head coach has been met with positive reviews, mostly because the team was expected to struggle.

Coming into Friday’s clash, Villa were joint top from three games including a derby win against rivals Express.

But the cracks have been visible in a club that signed 20 players in the concluded window.

Mainly, is the lack of creativity in the middle of the pack and that had left the forwards stranded and without impact.

They can be forgiven for now for the fact that youngster Travis Mutyaba is busy with Exams, but a quick fix will be required.

Just like in their previous games, Villa banked on their solidity at the back to get the job done at Njeru.

And it worked until the last minute of the game when Wandyaka struck.

Their only open scare in front of BUL goal arrived in form of Ivan Sserubiri’s powerful free-kick which was parried out by goalkeeper Emma Kalyowa.

They also had some good moments when Charles Bbale came in before the second half, with the forward beating two markers only for his effort to be blocked by Otti.

Amd their run of winless games against BUL continues since they beat the side back in November 2017 when Martin Kizza scored the only goal of the game.

They lost to BUL home and away last season.

It will be too early to call out Magera, but questions are going to be asked. And that’s the nature of coaching a record champion.

What Next
BUL will take a short trip across town to face Gaddafi in an Eastern derby on October 25 while SC Villa welcome Busoga United on October 28 at Wankulukuku.