Journalism: How Fifi Has Flourished In Male-Dominated Industry 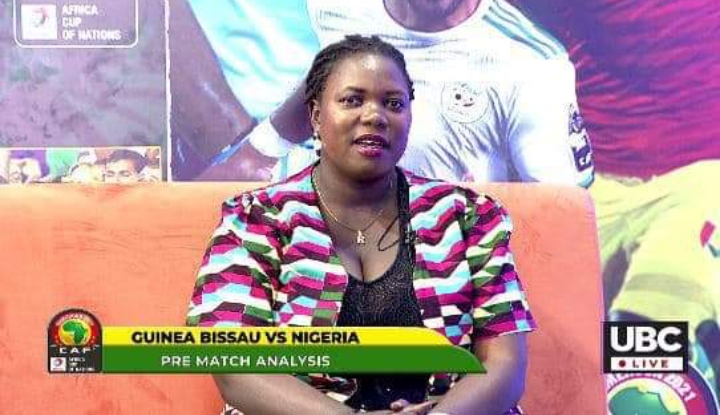 A certain Minister invaded the studio with a gun, that altercation with a coach at Lugogo, vulgar phone calls from listeners, heated debate when FUFA Boss Moses Magogo visited the studio and uncomfortable exchanges with players, Fifi Pinky has seen it all.

Born Phionah Namiiro, Fifi, is celebrating 10 years in Journalism. A remarkable achievement for a Lady in an industry that has for long been dominated by men.

Fifi protruded to the scene in 2012 after joining Uganda Broadcasting Corporation (UBC) but her humble beginnings can be traced back at Capital Radio where she started out as a sales executive.

Later, she tried out Sports Reporting for sister station Beat FM between 2010 and 2011.

A year later, Fifi says that she was helped by Nyombi Nicholas, a man she has since regarded as a brother, join him on Dembe FM.

And that’s where she got a chance to rub a shoulder with one of her role models in Aldrine Nsubuga.

“Aldrine made my life comfortable for me to quench my passion for sports after a plethora of altercations regarding Serena Williams, Cristiano Ronaldo and, my favorite, Liverpool. I guess you get the drift,” Fifi wrote in one of her release while reflecting on her 10 years.

Fast forward, Fifi who is working with UBC and Star FM, has established herself as one of the leading Sports Journalist in the country, and her rise has been built on her good network with some of the top sports administrators, hard-work and dedication.

And it goes without saying, her stint as Uganda Premier League co-commentator with Peter Otai during the Azam TV days, proved her versatility.

Because of her fearless nature, Fifi has tackled some huge and controversial topics, and on many occassions, that has landed her in hot soup.

And here is our interaction with Fifi, a Mother, Wife, Friend and a leading Sports Journalist.

The-SportsNation: What attracted you to join Sports Journalism?
Fifi: My Mom the late Sarah keziah Naomi Nanfuka loved sports and supported Express and Buikwe Red Stars. She also used to fund Redstars actually and travelled with them to most of their away games. She made me love sports and eventually sports journalism. Serena Williams and Christiano Ronaldo deeply positively affected my decision to join as well.

The-SportsNation: How did your parents take it?
Fifi: My mom had died by the time I joined and my Dad didn’t really mind since he realised he couldn’t talk me out of it

The-SportsNation: How did you get started?
Fifi: I had my Internship at Capital radio in late 2009 then Sales Executive thus joining Sembatya Junior on Beat FM just to report results. Then Nicholas Nyombi took me to Dembe FM in 2011 and finally Kenneth took me to UBC in 2012.

The-SportsNation: Ten years in the business, how do you reflect on this journey and how tough has this been?
Fifi: It has been one hell of a boat. Some waves so huge but also taught me how to swim. It has been tough but my late mum always said that “how would we ever evaluate our strengths if we didn’t encounter challenges?”. I have met angels in the fraternity but some thorns have been everywhere though I learned to walk on thorns and nurse my wounds in the process. It’s a low earning profession but the friend I have made have been the best investments for me in life.

The-SportsNation: More ten years in Journalism
Fifi: The next 10 years call for balancing between my family and the job, create room for young ones to build careers. Focuss on my foundation and embark on an a daily income generating venture. I want to leave room for consultation and also Persue other personal goals.

The-SportsNation: Two people you look up to in Sports Journalism?
Fifi: When I was starting I looked to David Lumansi and Aldrine Nsubuga.

The-SportsNation: What can you pin point as your main highlight during this career?
Fifi: Meeting Ronaldo (Christiano) at Dubai but not being able to go near kills me inside. I was with a couple of big people (including a Minister), Ronaldo and his team had a match there, possibly a Club World Cup game. But he was heavily guarded.

The other one has to be when I went into Labour while doing a Radio Sports show in 2016. Difficult moment, had my baby later in the night, that was the same day Serena Williams won her 22 grand slam title and Portugal won the Euro. Got many visitors while in Hospital including my top friends Desire Luzinda, Gen Katumba Wamala, then Sports Minister Bakkabulindi among others.

The-SportsNation: Most embarrassing moment you have ever had?
Fifi: Failing to get the right words to describe a moment during commentary of the Ugandan premier league. I remember Fahad Bayo had scored with a scissor kick, I lost for words to describe the beauty of the goal, paused for some good minutes and Peter Otai covered me.

The other one was when I emphasized on a story gotten from a wrong source which clearly made it vague. I remember it was about FUFA CEO (Edgar Watson) resigning.

The-SportsNation: How is your typical day like?
Fifi: I wake up at 5:00 am. Say a prayer , take a bath and get involved in preparing my son for school. Then at 6am I leave home to work. Do the morning show btn 6:30 am and 10:00 am. Go to the field come back at 1:00 pm. Produce Sports and prepare schedules and scripts for weekly matches and live sports activities during the week then head home or m/ field at 4:00 pm. If there’s need I come back to studio for the night show between 10 and 11pm or coordinate those who will be commentating matches. 7 to 9 pm is family time.

The-SportsNation: That’s hectic, does this cut across to weekends?
Fifi: Saturday; I normally wake up at 8am, tide the house and go to a play park then head to studio between 2 to 6. For Sunday, its rest day but I can also supervise sports activities on the radio.

The-SportsNation: What advice do you have for people who want to do what you do, especially Ladies?
Fifi: Believe in God and themselves. Face up to the challenges and identify what they can do best. Focuss and go an extra mile.

The-SportsNation: Best compliment you have ever received from your listener?
Fifi: Many have told me that they will die if they don’t listen to me. That I am their GOAT!

The-SportsNation: What do you think has made you tick for all these years?
Fifi: Fearless factor and always to take on the whole world to achieve my targets. Praying to God and always ready to find solutions if problems arise.

The-SportsNation: Have you ever had a confrontation with any Sports Administrator or fan or player in line with what you said on air?
Fifi: many; Brian Ssenyondo (UPDF FC coach) found me at Lugogo, and he was cornering me to the gate. He had a long verbal rant. He told me that he is still young coach but I have always verbally attacked him on most of my shows. That I accused him of being a witch and he is the reason as to why his former player at Synergy Nicholas Kasozi has failed to play to his expectations.

I criticized Simon Tamale during his poor spell where he conceded silly goals, and he took personal, he called me on phone and vowed to prove me wrong.

Mustafa Mujuzi also one time came to Star FM studio, I had another confrontation with Yusuf Mukisa, Nicholas Wadada etc.

The-SportsNation: That show you will never forget?
Fifi: There was one when a Minister pointed guns at us in studio after we had taken a couple of series on Uganda Super League. And I will leave that at that.

Then when FUFA Boss Moses Magogo finally came to the Black Thursday show on Star FM. I was working with Haruna Kyobe on the show. Kyobe greeted Magogo thrice on arrival, but he refused to respond. We had a tense show until the end.