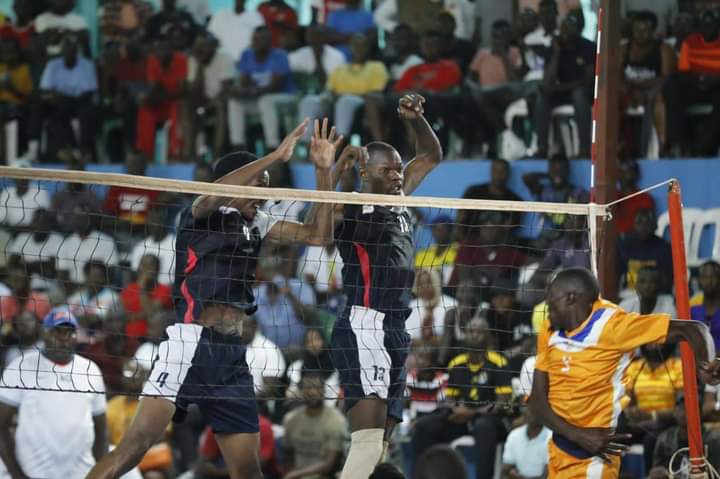 Head Coach Dube Memory marked four consecutive wins at the wheel of Kampala Amateurs Volleyball Club, with a tidy covering against a demoralized Sky VC, to reclaim the top spot in the National League.

Sky came from two points down to drive a narrow lead but later gave in to a charging KAVC, to lose 28-30 in a highly competitive first set, which turned out to be their day’s best set.

KAVC would later return to dominate set two from the start, with opposite hitter Jeff Onapa pinning the Coachless side, to stir their six-point lead, and eventually win 25-16.

Sky’s returned as a shadow of themselves, failing to hold up a simple three-touch routine, which drowned them with nine points to catch in the second set.

Dube Memory’s charges brought a big boys’ flex to the final round, which saw them pick a fourth straight win since their first game against the UCU doves.

OBB went down 3-0 in a bitter fight to a practically rebuilding Nemostars that relied on raw talent Esau Esil, to break down a scary OBB defense on Saturday at the Old Kampala Arena.

Esau was handed a rare start, and in return awarded Coach Andrew Okapis’ faith with an execution to remember, as a way to underline his stance on the first selection.

The Orange Block Busters came out all guns blazing but were put to the gutters by Nemostars who supposedly sought the win much more than the Iganga outfit did.
According to Nemostars’ Captain George Aporu, the fixture was a morale booster to the Nemo camp who were yet to win a game in straight sets from the start of the season.

“Coming into this game, we said we needed to win, for us to gain more confidence because there was a lot of bickering that we were doing badly as a team. So this is a good message for the team. The boys now get more confident which has always been my motive.” The skipper said.

Talking about the New players’ progress on the team, George noted “the pressure to impress”, as one of the reasons that could be holding back the new additions from shining.

“The new players have been working hard though struggled to fit in because of the pressure that comes with playing for a team of Nemo’s magnitude. We are not yet where we want to be, but it’s a step in the right direction.”

Needless to say, Nemostars were dethroned of the League title last season by OBB, so picking a 3-0 win in regular play is revenge, but not as good as the Nemos would want it.

“The revenge is not as perfect as I would want it because losing the league was a very big blow for us, making players drop their shoulders a bit, but it’s a good comeback showing these guys that we are still on.” A confident Aporu concluded.