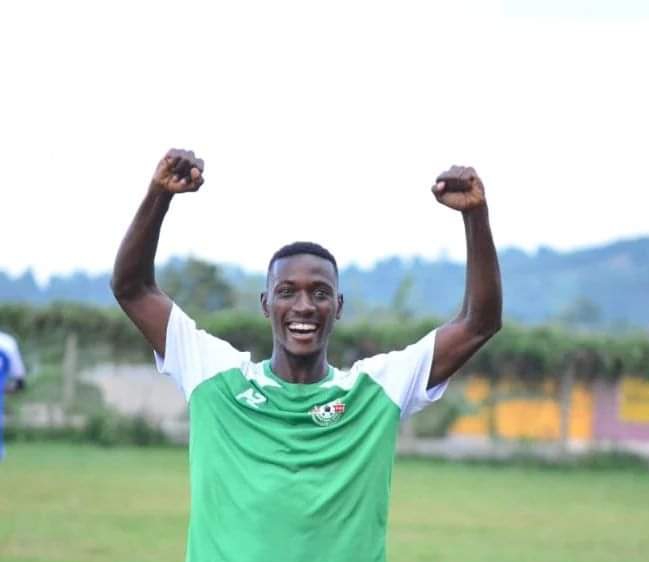 UPDF striker Ivan Ahimbisibwe is delighted after opening his account with three goals against Busoga United.

The former Nyamityobora striker who was named the man of the match after his hat-trick ensured that UPDF came from a goal down to beat Busoga United 3-2 at Bombo Barracks Ground to collect their first maximum points of the season.

The visitors took an early lead in the 5th minute through Kintu Hassan before Laban Tibiita scored a consolation in the 77th minute to make it 3-2.

Speaking to The-SportsNation after the win, a cheerful Ahimbisibwe was glad for the trebke having failed to score in the opening two games.

“I feel so Delighted to have opened my account this season with a hatrick” he opened up.

Last season, he scored 10 league goals in his debut season in the top flight and he’s 8 goals away to surpass his feat.

“It’s been a long waited moment to start my season from where I stopped last season having failed to score in the first two games”.

Ahimbisibwe goes into the history books as the first player to score a treble this season.

“Am humbled and extremely happy to be the first player to score a hatrick this season”.

“I didn’t see it coming but because of hard work and team work it has happened, this will motivate me to double my effort and stimulate my self and the team to great wins this season”.

The UPDF number 9 target is to play as many games as possible this season and score more goals that will help his team as well as earning a national team call up.

“As a player, my target is to get better everyday and improve every aspect of the game”.

“I want to play many games and score more goals inorder to win games as well as representing the national team, I will achieve all these by believing in God, focus and discipline”.

This was UPDF first win of the season after a draw with Express and a lose to BUL FC in their opening two matches.

“It’s a good win to start our marathon, we just need to stick together and keep believing as a team and I want to congratulate my teammates having picked our first win this season”.

The Visitors took an early lead in the 5th after Hassan Kintu half volley went over the Goalkeeper and the defenders.

“Busoga took an early lead but we kept our heads up because we knew this was the day and the time to turn everything round”.

UPDF next assignment will be an away trip to Soltilo Bright Stars at Kavumba Recreation Ground on Wednesday.