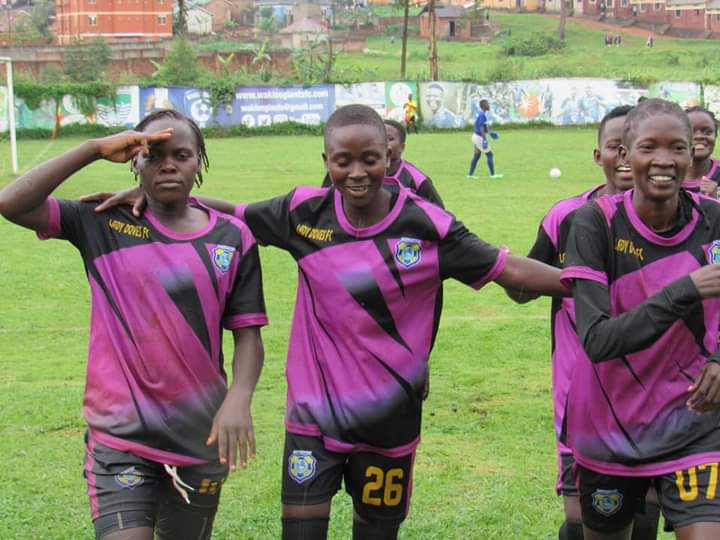 Norah Alupo scored four goals while Rashida Nankya added another strike to compound Rines misery in their fourth defeat in as games.

They had previously lost to Uganda Martyrs, UCU and Olila.

It is Lady Dove’s second win following a 2-0 victory against Kawempe Ladies last weekend after losses against Olila H/S and She Mak.

The match was delayed for over one and half hour due to heavy down pour experienced at Wakiso which made it hard for both sides to keep possession for the entire first half.

At a very slippery turf, the hosts had the first chance of the game when Yuster Kayesu presented to a goalkeeper to beat chance from Amina Nababi’s through ball, but goalkeeper Rose Bamaniriza was quicker enough to pull a credible save.

Alupo made the visitors first attempt on goal count when her curler beat Joan Namusisi after receiving from Dorcus Kwikiriza just out the box.

Just after half an hour mark, Alupo scored in an empty net to make it 2-0, capitalising on miss communication between defender Catherine Wujja and her custodian Namusisi.

Desperately chasing for a comeback, the hosts’ came close to goal in 52nd minute but Nalukwago’s free header off Yuster’s cross went wide.

Rines had their best chance when Eva Nagayi’s attempt was fingertipped by Bamaniriza into a corner.

Yuster again had a one on one with Bamaniriza off Nababi’s beautiful through ball but she selfishly squandered it away to deny her side a comeback.

Rines all of a sudden switched off in the last 15 minutes, creating a nervy ending for them selves which resulted into three goals.

Five minutes later, Nankya returned the favour to Alupo when she set her for a replica of a third goal, to make it 4-0.

Alupo completed her haul and a fifth for her side when she capitalised on Wujja’s mistake to score an easy one.

Rines will visit Kawempe Ladies in their next fixture while Lady Doves will host Gafford ladies.