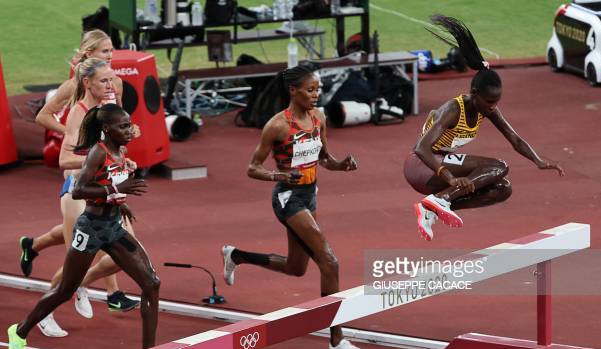 Uganda’s Peruth Chemutai will be in 3000m Steeplechase final on Friday night at the ongoing 2022 Commonwealth Games in Birmingham.

Nakimuli is already in the semis which is already a medal bracket stage, and even a loss will see her settle for bronze.

Chemutai won Olympics gold last year in Tokyo in a time of 9:01.45 but failed to live to the billing this year at the World Championships in Oregon after finishing 11th.

She clocked 9:05.54 in Oregon, citing an injury, but even that time is still the quickest compared to the other seven athletes she will be competing with in the Birmingham final.

That include Jackline Chepkoech from Kenya who didn’t go past the heats in Oregon and English athlete Aimee Pratt who has the second quickest time.

The Games record was set by Ugandan icon Dorcus Inzikuru who clocked 9:19.51 at the 2006 games in Melbourne.

And Chemutai will hope to rewrite a new one, just like Kiplimo previously erased Cheptegei’s 10,000m games record.