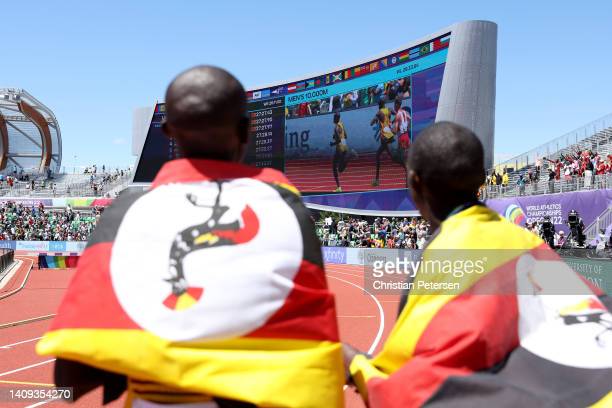 Uganda finish 16th on the medal table after claiming three medals at the World Athletics Championships held in Eugene, Oregon (US).

It’s a joint place finish for Uganda who ties with Belgium and Sweden on medal count.

Only Ethiopia, Kenya and Nigeria (13) finish above Uganda on the Continent. With Nigeria finishing with two medals – Gold and Silver.

And needless to say, Uganda would have finished as high as fifth if Cheptegei lived to the billing and won that 5000m.

The next championships will be held in Budapest next year in August.

How has Uganda been Performing in Past Editions?

At 2011 in Daegu (Korea), Uganda finished without a single medal, despite taking 12 athletes at the games.

At 2009 in Berlin (Germany) – Uganda came back empty handed, having taken 12 athletes as well.

At 2007 in Osaka, Uganda won one medal – Moses Kipsiro clinching bronze at the 5000m behind Bernard Lagat (US) and Eliud Kipchoge (Kenya).

At 2005 in Helsinki (Finland), Uganda won one medal, Dorcus Inzikuru’s gold medal in the 3000m Steeplechase.

Davis Kamoga won Uganda’s first ever medal at World Championships – Silver in 400m (National Record) – behind the great Michael Johnson (US) at the 1997 Athens.

Uganda sent 17 athletes at the Worlds, a decrease from 21 that represented the country in Doha three years back.

Three medals is a tally most countries will take any day and Uganda will leave the Championships with heads high.

However, there was high hopes for Uganda to perform much better at Hayward Field after recent events.

A double gold-victory for multiple World Record holder Cheptegei looked a safe bet after he entered in both 10,000m and 5000m.

Jacob Kiplimo who had won bronze at the 10,000m in Olympics was also a medal hopeful, and he lived as advertised when he repeated the Tokyo events.

Peruth Chemutai couldn’t repeat her shock 3000m Steeplechase win in Tokyo. She finished 11th in a time of 9:21.93, majorly hard done by illness prior to the final.

Halimah Nakaayi went to Oregon as a World Champion after her win in Doha, but couldn’t go past the semis after coming eighth in a lowly time of 2:01.05.

There was some hope that Winnie Nanyondo could pull out a surprise after years of trying but came eighth 4:01.98 in the 15000m final, after she was reinstated in the final following those ugly incidents in the semis when she was pushed by Italian Gaia Sabbatini.

And all hopes of a podium finish from either Fred Musobo, Jackson Kiprop and or Filex Chemonges in the Marathon didn’t come to fruition.

But there were encouraging performances, mainly Tarsis Orogot who reached the semis of the 200m, the first Ugandan to run that distance and second Male sprinter after Davis Kamoga at the World Championships.

Focus turns to the Commonwealth Games, where a couple of these athletes will be crossing over to Birmingham.