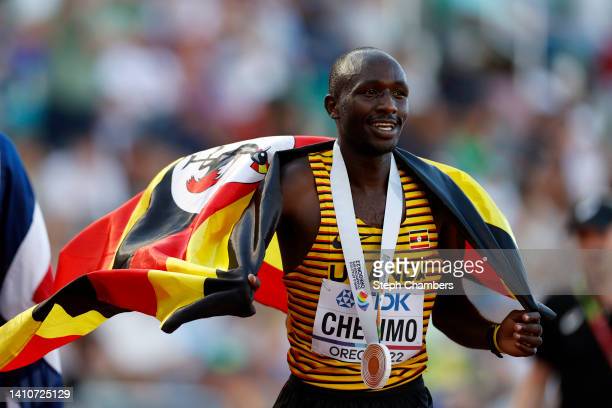 Uganda’s long distance runner Oscar Chelimo clinched bronze in the 5000m as the curtains came down for the World Athletics Championships in Eugene, Oregon (US).

But it was not meant to be for World Record Holder and Olympic champion Joshua Cheptegei who came 9th in what proved to be a difficult race.

And Chelimo ensured that Uganda finish the games with three medals after a late kick from the outside lane down the stretch.

Cheptegei and Kiplimo had won Uganda’s first medals in Oregon when they took Gold and Bronze respectively in the 10,000m.

Chelimo was at the tail after 3000m before improving to 8th place coming onto the home straight where he went through his gears to come home in third place.

He was not among the favourites coming into the final but his victory in the heats had given a hint of what he was capable of.

1500m Olympic champion Ingebrigtsen who was earlier beaten by Jake Wightman at the distance, stunned a classy field to take gold.

Cheptegei had led for the first 1000m and so, but uncharacteristically slowed down and could not recover.

Grant Fisher (6) of the United States and Kenyan duo Nicholas Kipkorir (7) and Daniel Simiu (10) finished outside the podium places.