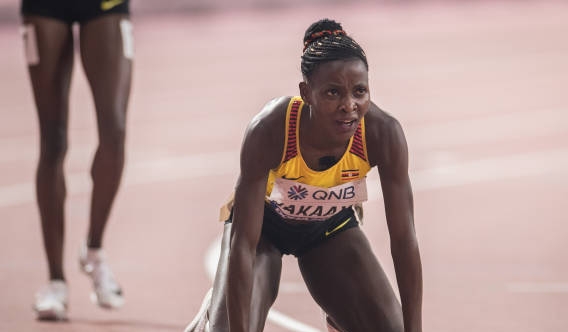 Uganda’s Halimah Nakaayi will not be able to defend her 800m title at the World Athletics Championships.

The middle distance runner failed to qualify for the lucrative final at the ongoing 2022 World Athletics Championships in Eugene, Oregon (US).

Nakaayi finished 8th in Heat three after clocking 2:01.05 in a two-lap race won by Athing Mu (1:58.12) of the United States on Saturday morning.

Diribe Welteji (Ethiopia) finished second to advance to the semis while third-placed Anita Horvat (Slovenia) picked one of the two non-automatic Qualifiers slots.

All the finalists dipped under two minutes and it was always going to be a big ask for Nakaayi who has since struggled to hit the ground running since Doha triumph.

Having qualified to the semis after finishing second in a time of 2:01.41 on Friday, Nakaayi was again put into a classy heat.

But she quickly got out of the blocks and led after 100m, but that was the only time she sniffed into the top three and she was fifth at the bell.

The gap continued to widen as the top two stretched away, as Nakaayi run out of steam before struggling to the finish line only ahead of Kenya’s Naomi Korir.

It is another disappointing outing for Nakaayi who failed to reach the Tokyo Olympics final after clocking 2:04.44 to finish bottom of her semifinal heat.

She will now shift focus to the 2022 Commonwealth Games in Birmingham.

Uganda, with two medals at the games, will hope for better fortunes on the final day when Joshua Cheptegei and Oscar Chelimo line up for the 5000m finals on Sunday morning.