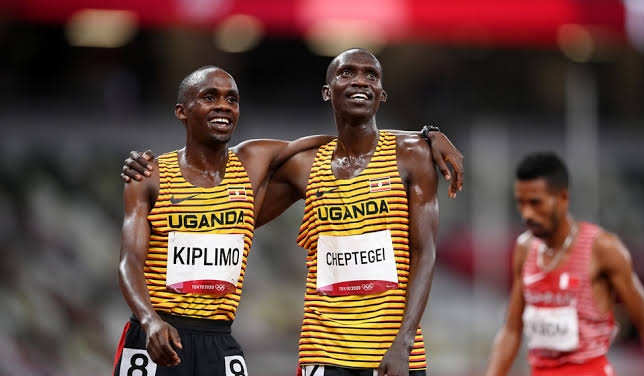 Joshua Cheptegei extended his dominance at long distance with a gold medal in the Men’s 10,000m at the ongoing 2022 World Athletics Championships in Oregon (US)

The tactical race was reduced to a sprint on home straight where Cheptegei held on to cruise home in 27 minutes and 27.43 seconds.

Kiplimo put in a late kick down the stretch to settle for Bronze, as the Ugandan duo served their revenge to Olympic champion Selemon Barega (Ethiopia) who missed out on the medal brackets.

The victory for Cheptegei, whose world record stands at 26:11.00, makes him the fourth athlete to defend the 10,000m World Athletics Championships title after Haile Gebrselasie, Kenenisa Bekele and Mo Farah.

This is the latest medal for Cheptegei at the World Championships having also won Silver at the 10000m in 2017 London behind Great Britain’s Mo Farah.

It’s also a sweet win for Cheptegei at Eugene (Oregon) where he also won the World Junior Championships in 2014.

Oscar Chelimo and Peter Marus will join Cheptegei on Friday morning for the 5000m heats.

Uganda, Ethiopia and Kenya athletes were the favourites to take the podium places, but it was going to go down on who plays his game right.

Cheptegei and Kiplimo were well aware of Ethiopia’s strength in that late burst as they did last year at the Tokyo Olympics for Barega to win gold.

With all the top seven in Tokyo entering for the event, it was pulsating right from the start.

The Kenyans held the cards onto their chest as they tried to spring a late surprise.

In Stephen Kissa, Cheptegei and Kiplimo had a martyr who set the pace to burn out the rest of the field.

And then Cheptegei and Kiplimo started to exchange the lead, a move that continued to exhaust the Ethiopians.

But they continued to lurk from behind, awaiting to ambush at the right opportunity.

Barega went ahead, laying down the gauntlet with about three laps to go.

But Cheptegei never fell for the bait as he maintained his pace while Kiplimo looked to have slowed down.

It remained a crowded pack at the bell as Cheptegei and Kiplimo started to make their move from outside.

Cheptegei was back in front, a position he maintained as the leaders went into the final bend, with Barega very close behind.

The Multiple World Record holder then showed his mettle, running through the gears quickly in the last 200m to cross first the finish line amidst a huge uproar from the Hayward Field Crowd.

Kiplimo, who was in fourth, going into the home straight, chased on with determination and he went past Barega who had already been outpaced by Mburu.

Barega was also beaten by Grant Fisher of the United States to fourth place while Canada’s Mohammed Ahmed came sixth.

Berihu Aregawi (Ethiopia) and Daniel Mateiko (Kenya) came seventh and eighth in that order while Kissa came at the tail.

Immaculate Chemutai will lineup in the Women’s Marathon on Monday at 4:15pm.