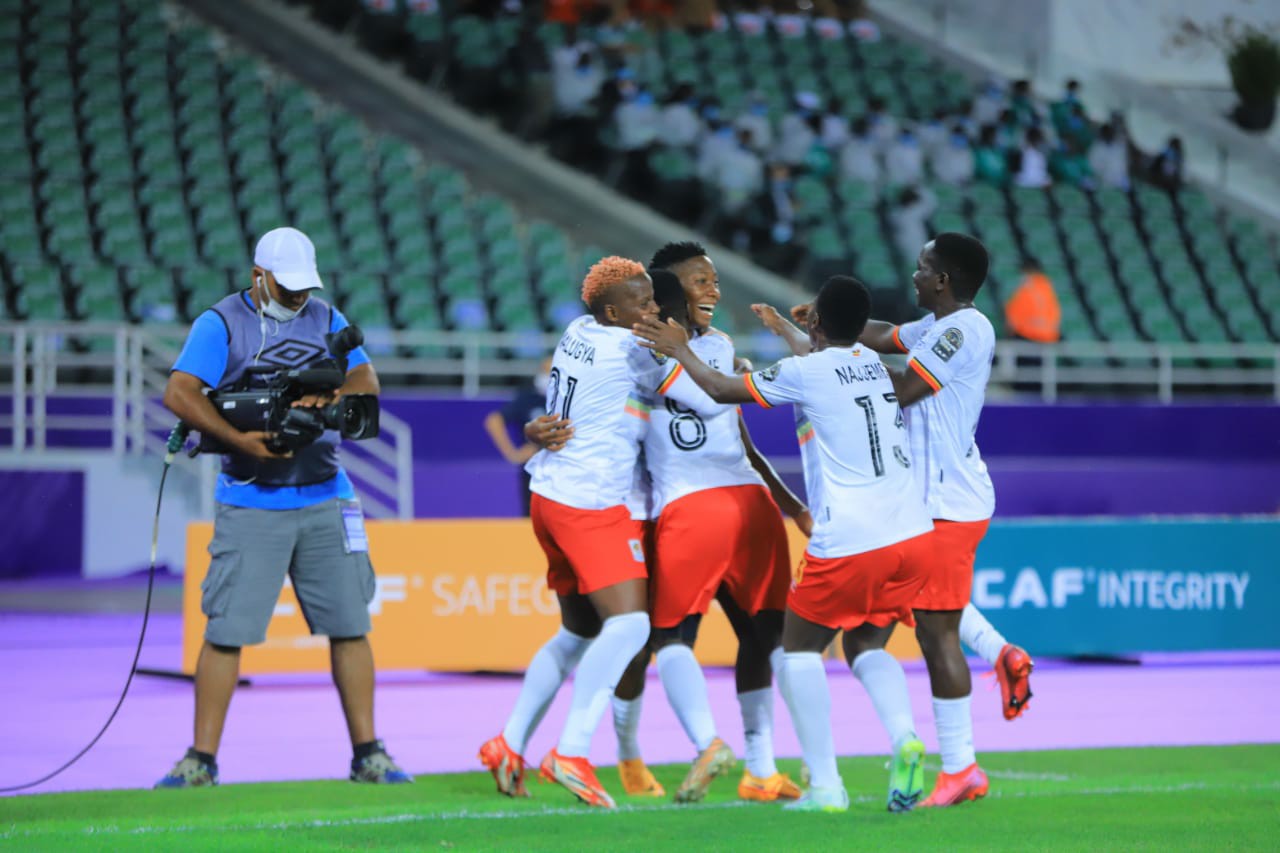 Sumaya Komuntale scored a sumptous freekick but was later sent off in controversial circumstances as Crested Cranes suffered yet another loss at the ongoing 2022 Women AFCON.

Komuntale levelled matters for Uganda before halftime after Rosella Ayane had put Morocco in an early lead from the spot.

And the Crested Cranes had faired well with Morocco before El Chad Nesryne headed in from a freekick in the 68th minute.

But Uganda’s attempts to stage another fight back was all washed away when Komuntale was judged to have back-slapped an opponent in the box.

And after VAR check, the referee pointed to spot before issueing out a second-yellow card to Komuntale.

Chizlane Chebbak coolly converted from the spot to put the game far away from Uganda’s reach.

It’s the second loss from as many games for Uganda at the tournament, leaving the side needing maximum points in their last game against Burkina Faso to at least progress as one of the third placed team.

Morocco join Senegal who beat Burkina Faso in the first game to reach knockout with a game to spare.

Morocco went ahead in the 10th minute from the spot after Margaret Namirimu was judged to have brought down Rosella Ayane in the box.

Referee had initially pointed to the corner after the incident before she was asked to check on the Video Review (VAR).

There were tense moments, and when she emerged back from the monitor, she pointed direct to the spot.

Per video replays, Namirimu’s contact was not sufficient enough to bring Ayane down, but the forward will take the credit for feigning the injury and decieving the referee.

The other big incident arrived later on when Komuntale who was fully in possession of the ball swung her hand in an opponent’s face who was a distance behind.

The referee had rightly ignored the incident, before another request from VAR.

And after reviewing the incident, she was convinced that Komuntale was guilty. She awarded the penalty and issued out a yellow card before checking her books to learn that she had already booked Komuntale, and hence it necessitated a red card.

From the video replay, there is nothing that suggests that Komuntale swung her hand intentionally into the opponent’s face.

It was actually an involuntary action for anyone running and trying to find balance before making a clearance.

To add layer to the incident, Komuntale was not in any way denying the opponent an ‘obvious goal-scoring opportunity’ and the double punishment was completely unnecessary.

Going into the tournament, Hassifa Nassuna was the Country’s best hope after her exploits in the CECAFA Women Championship.

The hopes were well founded given her intelligence and ability to break down and find spaces in defences, and not to mention her scoring ability after becoming the first player to score 100 goals in the Ugandan league.

Coming off in the first game against Senegal before the second half turned heads.

And when the lineup against Morocco was revealed, the FUFA website confirmed that the UCU Lady Canons player is ill.

Her void was visible as the attackers failed to link up well, while Ritah Kivumbi was ignored up-front with no chemistry visible.

Uganda struggled to retain the ball and were clueless everytime they crossed the centreline.

There were some half chances here and there, including two missed by Fauziah Najjemba which went begging.

Komuntale, not in a good angle, scored from a well taken freekick to the near post to leave the keeper stunned, in what may be one of the tournament contenders.

But Asia Nakibuuka will feel luck earlier on for surviving a send-off after a reckless tackle minutes later on.

Sandra Nabweteme had a mixed performance, a couple of misplaced passes just like Nalugya, but the forward had a chance to redeem herself before arriving late to miss a powerful cross from Kivumbi in the area.

Uganda later conceded the second in the 68th minute, with El Chad Nesryne who plays in France, freeing herself to head in from floating freekick.

And Uganda never recovered, with a dubious penalty and red card coming in as final blows.

Two wins from as many games have guaranteed Morocco a place in the knockout.

And the side will fancy their chances to go far on home soil.

After beating Burkina Faso 1-0, in a game they should have won by a bigger margin, coach Reynard Pedros made just one change for the Uganda game.

They remain fluid going forward, and greatly helped by a raucous crowd that made their intentions known right from the time the Anthems were sang.

There were moments when they looked vulnerable in defence when the game was 1-1 and at times rushed their attacks and grew restless going forward.

Goalkeeper Aturo denied them one at the hour-mark, but she couldn’t repeat her heroics when her defence failed to defend a well weighed freekick from captain Chebak Chezlane for El Chad to score.

Next for Morocco will be a much anticipated tie with Senegal to determine who finish the group on top.

Morocco failed to go past the group stages both in 1993 in Nigeria and 2000 in South Africa, and after achieving that, target now shifts to go past the Quarterfinals which will come with a ticket to the 2023 Women World Cup for now.