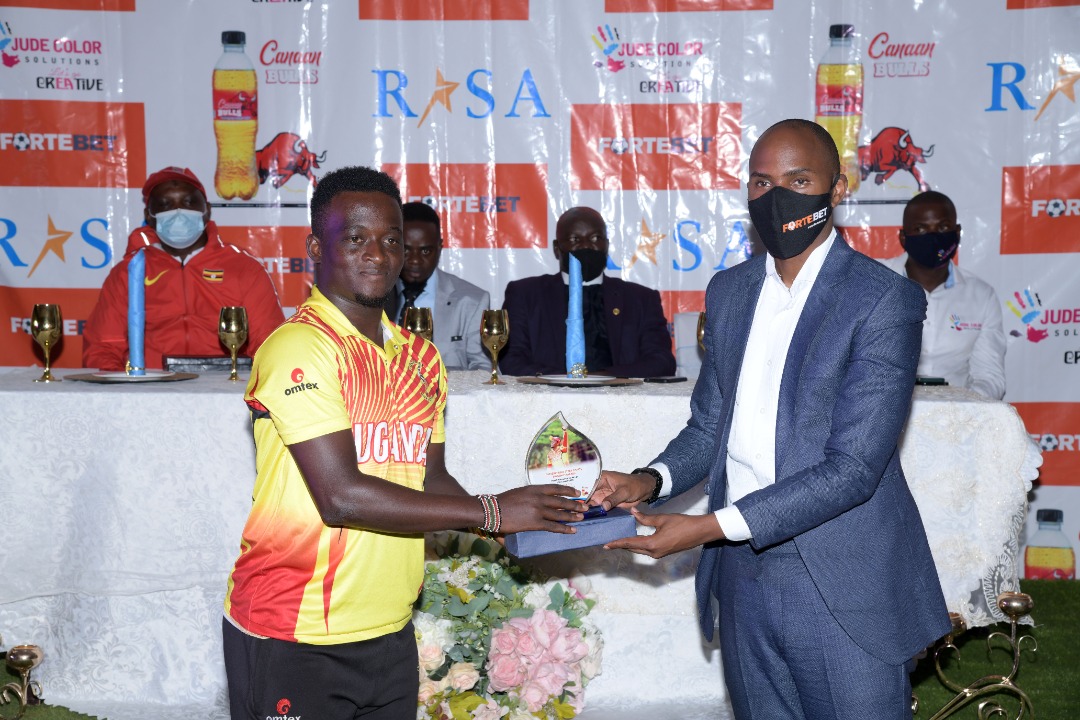 Cricket Cranes opening batsman Simon Ssesazi was one of the five winners at the Fortebet Real Stars Awards on Tuesday.

Ssesazi was named the best Cricketer of the concluded month of June after his exploits at the concluded second leg of the World Challenge League B in Kampala.

He scored 202 runs as Uganda retained their top spot going into the third leg as they continue their long pursue for a place in the 2023 ICC Cricket World Cup.

“Hard work pays, and it feels nice to be appreciated today,” he briefly told Journalists at the brief awards ceremony at Route 256 bar.

“This has come with a lot of effort, I thank the sponsors who have made it happen and I want to do more for the country.”

He was good value for the accolade after posting three half-tons – He had 50 off 53 balls against Bermuda in a 8-wicket victory, another 50 off 41 against Jersey and an unbeaten 87 against Kenya.

She was the top scorer and MVP at the U18 Zonal Qualifiers held at Lugogo where Uganda edged Rwanda and Tanzania to seal a lone ticket to Madagascar.

CECAFA sensational Fazilah Ikwaput who scored in each of Crested Cranes’ five games as Uganda won their maiden regional title, was named the best footballer.

Rachel Chebet Zena who won Uganda’s only medal (Silver) at the African Athletics Championships at the Cote d’Or National Sports Complex, St Pierre in Ivory Coast, in 10,000m in a time of 32:17:06 was named the best Athlete.

Michael Alunga beat Godfrey Nsubuga and the duo of Joram Tumwine and Julius Borore to the best Golfer accolade.

The awards that recognize the best performers are an initiative of Isaac Mukasa and are sponsored by ForteBet and Jude Colour Solutions.

Tuesday’s Ceremony was graced by Uganda Athletics Federation President Dominic Otuchet who congratulated all winners and challenged them to remain focussed.