Challenge League B: Uganda Beat Kenya To Remain Atop 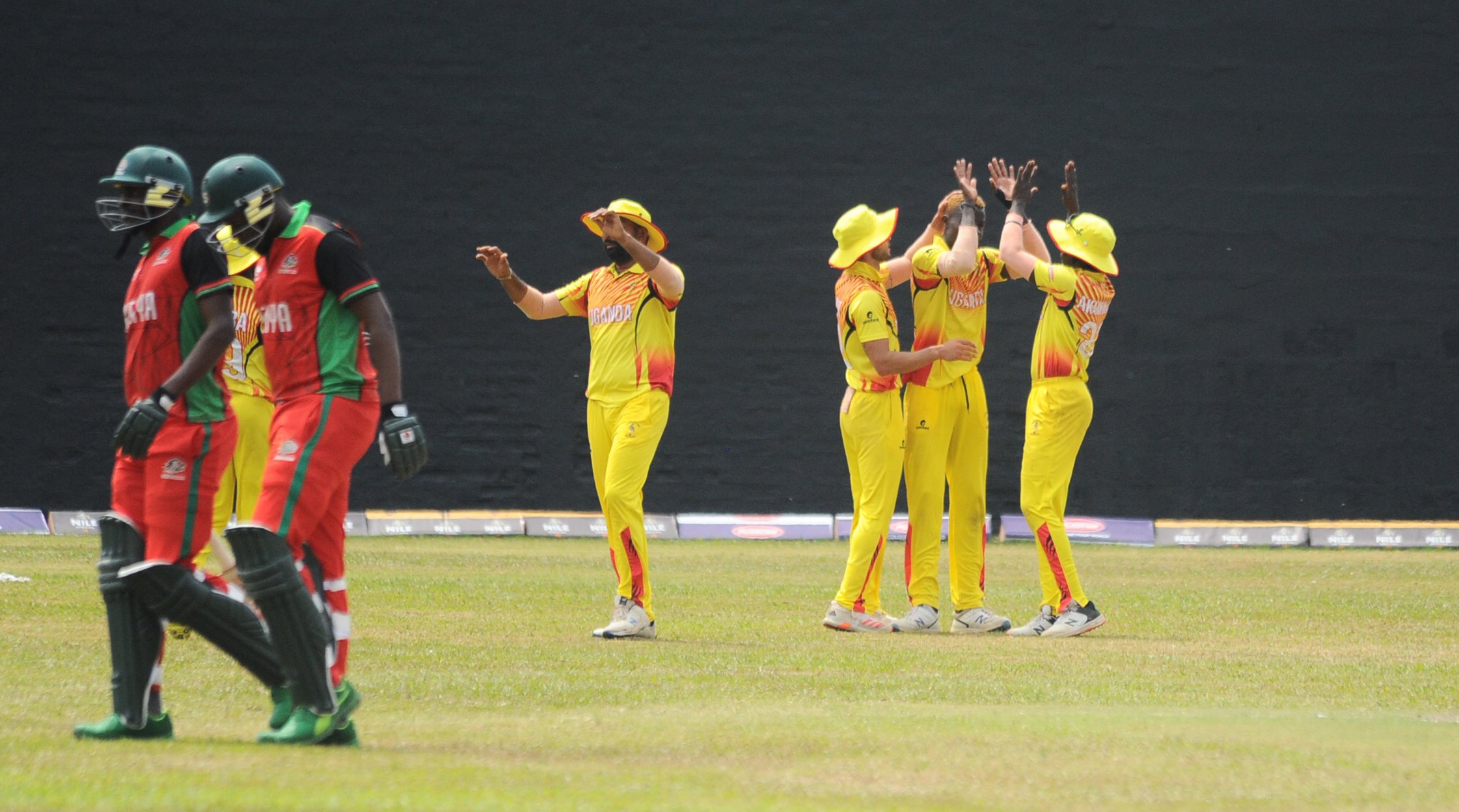 Uganda registered a seven-wicket victory against rivals Kenya to seal a top spot after their last second round game of the Cricket World Cup Challenge League B.

Simon Ssesazi (*87) and Cosmas Kyewuta (3-22) were key for the Cricket Cranes at Lugogo in-front of a cheerful crowd.

The win was anchored by discipline with the ball and patience with the bat for the victory that washed away past near misses against Kenya.

The result also ensures that the Cricket Cranes finish their second round campaign on top of the League B table with 16 points.

Coach Lawrence Mahatlane will now shift focus to preparations for the third round in Jersey due July/August.

If Uganda maintain their lead at the top after the third round, they will not only attain an ODI status but also progress to another level of qualifier for the 2023 World Cup in India.

After winning the toss, Kenya elected to bat first and they started off like a house on fire, squeezing out 21 runs off the opening three overs before Kyewuta delivered the first punch on Rushab Patel in the 8th over.

Kenya who were 67/3 at one stage, persevered to 197/5 after Rakep Patel’s 72 runs before he was caught by Frank ‘Franco’ Nsubuga.

Franco, who came in for Emmanuel Hasahya from the team that played the Italy game at Kyambogo, put up a vintage show that was highlighted by a chase down TV-advert catch to take out Collins Obuya.

Kyewuta’s pace troubled Kenya, Riazat Ali Shah (3-54) and Dinesh Nakrani (2-48) were also key as well as Uganda restricted Kenya to 220 all out.

Needing 221 to win, the Cricket Cranes were aware of what was at stake and couldn’t afford to upset the huge crowd that included schools St John Mukono, Busoga College Mwiri, Buddo and Jinja SS who had cheered loud throughout the first innings.

Brian Masaba was a surprise opener, joining Ssesazi on crease, and the opening duo absorbed early pressure to wither through the storm until the captain was bowled by Eugene Ochieng on the first ball of the 12th over.

Masaba walked off with a respectable 22 off 34, and the crowd applauded his effort as Uganda had crawled to 46/1.

Ssesazi hit to 50 after facing 60 balls, and Ronak Patel reached the milestone as well for a partnership that delivered 82 runs!

Ochieng and Karim combined again to take out Kenneth Waiswa (4) after facing just 7 balls, to pave way for Dinesh Nakrani who came in at number 5.

Nakrani (55 off 47) who earlier had success with the ball, shared an unbeaten 90-run stand with Ssesazi to drive Uganda home with composure and patience.

Uganda won all their five games in the first round of the Challenge League B in Oman back in 2019 to finish on top.

And after given rights to host the second round of the series scheduled to take place between 3 and 13 August 2020, COVID-19 hit and the round had to be postponed twice.

Finally, the game’s got underway in Kampala (Lugogo and Kyambogo), and it was a false start for Uganda who lost their opening two games against Jersey and Hong Kong to loose their top spot.

But three wins consecutively against Bermuda, Italy and Kenya mean Uganda will go to the third round in Jersey on top again.

If Uganda, who will face the same five teams finish atop, will progress to the Cricket World Cup Qualifier Play-off where they will be joined by other five teams including the bottom four finishers at Cricket World Cup League 2 and the other winner of the Challenge League A.

The six teams in Challenge League A are Canada, Singapore, Qatar, Denmark, Malaysia and Vanuatu, in order of their standings.

In that Qualifier Play-off, target is to finish among the top two for a place in the final Cricket World Cup Qualifier in Zimbabwe next year.

That Qualifier in Zimbabwe will have ten teams and the top two qualifies to the glamorous World Cup in India 2023.