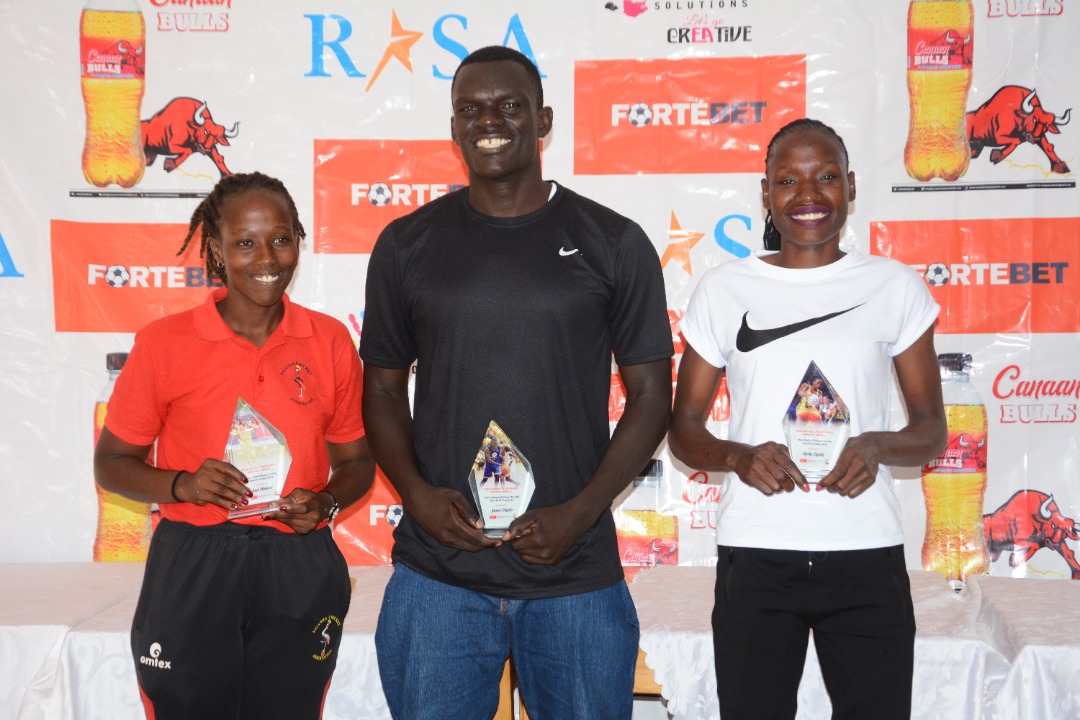 The awards for the best athletes for month of May were recognised on Tuesday at Route256 Restaurant in Lugogo, Kampala.

She finished as the tournament’s top scorer, notably scoring 37 goals in the final against KCCA at Kamwokya.

Oyella briefly commented: “I am so happy to be named the best of the month, this is another motivating factor for me to yearn for more.”

She beat Jessica Achan of Prisons and KCCA’s Shafie Nalwanja.

It was a difficult month for Okello who lost his mother, and from the burial, the team suffered an accident. Consequently, three of their games had to be rescheduled.

Okello said that he wanted to sit out those games because he was not in good mental state to play, but he realised that his team needed him more and had to walk back his decision.

“I am very happy for this, it has not been an easy journey for me, we were not in a good situation as a club as well. Actually, I wanted to sit out those three games but my team needed me much and I am glad that we played well,” Okello stated.

“My fellow nominees had good games as well, Brenda scored more than 30 points in her last game and that is not normal. Tonny has been outstanding in all our games as well.

“I just have to focus and forget about my worries and not let the death of my Mum affect me, and as a team, we are ready to defend the title, we have not reached where we want to be but I am happy with the progress of the team.”

Mbabazi was outstanding as Victoria Pearls won the Nepal series, going on to score a combined total of 74 runs and picking two player of the match awards.

Mbabazi commented: “Thank you to everyone who voted for me and I promise to continue working hard. Right now, focus is on the Kwibuka Tournament in Rwanda and as Victorial Pearls we just want to continue improving our rankings.”

Cherotich was named the best Athlete after winning two medals – He won Bronze in 1500m and Silver in 3000m – at ISF World School Games in France.

The best Footballer went to Ikwaput who finished as the FUFA Women Super League top scorer.

She takes the award ahead of Hassifah Nassuna (UCU Lady Cardinals) and Bobosi Byaruhanga of Vipers.

Henry Zzimbe of Jude Colour Solutions stated: “I just want to thank the media for doing a great work in pushing this brand, We are committed as Jude Colour Solution to go a long way with Real Stars Awards. Many people never believed in us when starting this but now you can see that we have grown from strength to strength.”