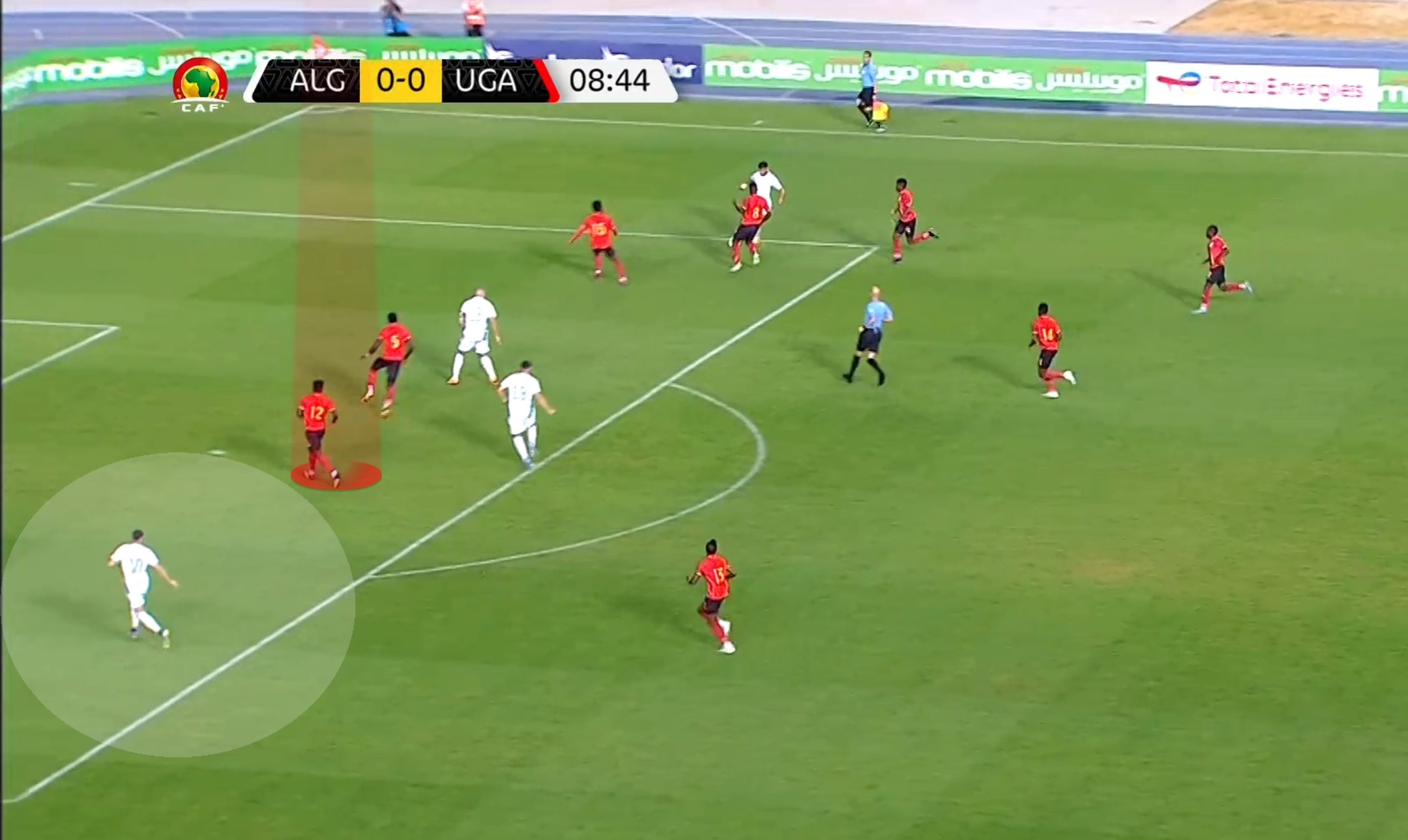 Former Uganda Cranes coach Johnathan McKinstry has given a detailed analysis of Uganda Cranes away loss to Algeria in their opening Group F game of the 2023 AFCON Qualifiers.

Goals from Aissa Mandi and Youcef Belaili saw Uganda fall at the July 5 1962 Stadium in a one-sided affair.

In his analysis, the Northern Irishman looked on the areas Algeria focussed on to secure the result and how Uganda sought to combat them.

Mckinstry said that Algeria forced the Cranes to use a low defensive field position.

In this defensive approach, it requires the team’s defence to be vertically compact and start defending more inside their penalty area which creates a lot of space for the opponents wide.

“A common occurrence when Uganda were in the low Block was full back Gavin Kizito to be found in a central position, very close to the RCB (Right Centre Back),” Mckinstry wrote.

“On many occasions this was as cover for the LCB who has been dragged out of position. Ideally a holding midfielder would be better equiped to cover, but as this did not happen the young full back moved inside.

“Combined with the large distance the winger Karisa (Milton) was required to cover in the defensive phase, this often resulted in an Algerian player being in significant amounts of space at the 2nd post. This scenario was obvious to Algeria from the beginning of the game was targeted on a regular basis throughout.”

And consequently, Algeria turned Uganda’s right back into an avenue.

Mckinstry, who was replaced by Interim coach Abdallah Mubiru before the appointment of Micho, added: “Algeria’s targeting of Kizito was not limited to his positioning. When possible they also sought to overload the fill back for aerial balls played to the 2nd post area.”

“No where was this more apparent than for Algeria’s opening goal where despite the Ugandan defence having the opportunity to organise whilst the ball was stationary – Algeria were still able to create a 3v1 scenario.

“This was a key opponent in who got first contact from the cross and ultimately the hosts creating and connecting the goal scoring opportunity.”

In the first goal, a freekick was floated to Uganda’s right, and Slimani who was unmarked headed it back into play, across the goal to be specific, and it was chested in home by Villarreal defender Mandi.

In his first explanations, Mckinstry credited Algeria for their use of space, calling it a disciplined tactical approach that ensured they often had players in space to receive the ball, as well as increasing the distances Uganda Cranes players needed to cover.

“Algeria demonstrated a disciplined approach to making the pitch as big as possible throughout the match. This positional patience ensured that not only were the home players often in good space when receiving the ball, but also increased the risk factor for Uganda when they elected to press – in such moments of Algiers were able to break through any Uganda pressure, the ability for the visitors to recover would be limited due to the large distances they would have to recover into.”

Uganda High Block Limited by Distance
Throughout the game, Uganda elected to defend in a varied format. On occassions utilising high, mid and low blocks to varying degrees of effectiveness. The implementation of the high block proved challenging throughout, as in what may have been an attempt to maintain a balanced shape across the field, players were often too far from their direct opponent to either remove them as a passing option or to apply immediate pressure if they did receive the ball. Combined with Algeria’s high Technical ability meant that the high block was often broken through relatively easily by the hosts.

When Uganda were able to execute this aggressive Midfield pressure horizontally – making use of the sideline as an additional defensive component it again allowed them to ‘close the net’ over the Algerian ball carrier. The added advantage of this example of Midfield pressure was that due to Algeria only able to play in-field from this position would allow Uganda to commit fewer players to the press itself and maintain a better level of balance – giving them more security should Algeria break through the press