CECAFA Women: Uganda Vs Rwanda: All You Need To Know 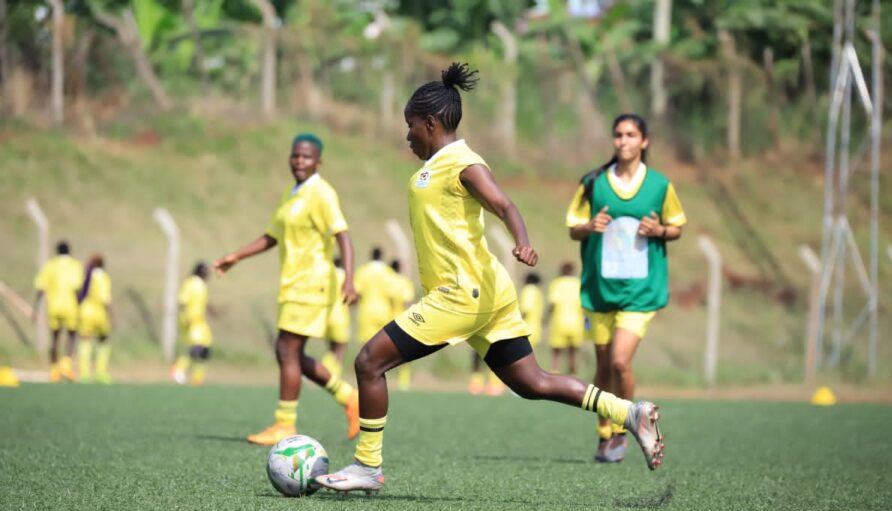 Uganda’s Senior women national team, the Crested Cranes, will be seeking to get off the mark against neighbours Rwanda as the 2022 CECAFA Women Championship kicks off at FUFA Technical Centre in Njeru.

Uganda Vs Rwanda will be played after the opener between Burundi and Djibouti. All games, for championship that will run until June 11, will be broadcast live on FUFA TV.

The tournament returns for the first time since 2019 after missing out due to COVID-19 pandemic. Then, Kenya beat hosts Tanzania 2-0 in the final to lift their maiden trophy.

But Kenya’s Harambee Starlets will not be able to defend their title after FIFA put a ban on Football Kenya Federation that also saw the country’s men team Harambee Stars pull out of the 2023 AFCON Qualifiers.

The tournament will be used by Uganda and Burundi as a precursor for the 2022 Africa Women Cup of Nations that will be played in Morocco that will be held in July.

Crested Cranes will fancy their chances to win their maiden CECAFA Women Championship.

But Uganda will be aware of the scenes in the 2021 CECAFA Women U20 Championship hosted at Njeru when they squandered a lead to lose to Ethiopia on last day!

Tanzania, who is also in Group B with Ethiopia, is another contender for the throne having won the tournament twice in 2016 and 2018.

George Lutalo’s side is a blend of young and experienced players, and will also bank on home support with fans allowed to enter for free.

The team has had literally good preparations for the tournament- The players have been in camp since May 8 at Cranes Paradise Hotel in Kisasi.

The tournament comes on the back of a competitive FUFA Women Super League that went to the wire, and a couple of players on Crested Cranes team will seek to replicate that league display to the National team.

The team’s strength lies mostly in the attack and it will be interesting to see who of Juliet Nalukenge, Sandra Nabweteme, Fazilah Ikwaput and Hasifa Nassuna will start.

Nassuna recently reached 100-goal milestone in the league and will hope to find her scoring boots at Njeru.

Lilian Mutuuzo, Margaret Kunihira, Zaina Nandede and Israel-based Shirazi Natasha will be hungry to prove a point in the attacking department.

There is a lot of quality across the field. Daisy Nakaziro is expected to start in the posts and will hope that Ruth Aturo is not missed.

Vihiga Queens’ Joan Nabirye and Kampala Queens’ Shamirah Nalugya will be expected to rule the middle of the park. 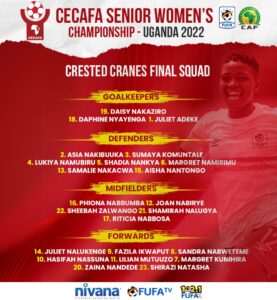 First Up Is Rwanda

Rwanda is not a powerhouse in Women Football, but any match-up between the two neighbours is always closely contested.

The teams meet again for the first time since 2018, a CECAFA meeting that ended 2-2 at the Kigali Stadium.

Rwanda pegged back the Crested Cranes in a four-goal thriller – Lilian Mutuuzo and Norah Alupo were on target for Faridah Bulega’s side while Anne Marie Ibangarye and Jeanette Mukeshimana responded for Rwanda.

A win will give the Crested Cranes morale and renewed confidence before facing Djibouti and Burundi on Friday and Sunday in that order.

“My players are in good shape and ready for the Championship. We are aware every team has come with targets and equally we have set ourselves a target of achieving the best. Therefore, we want to start the first game on a high.

“I believe the games we will play here are important in our road to AWCON and therefore we hope to get the best preparations.”