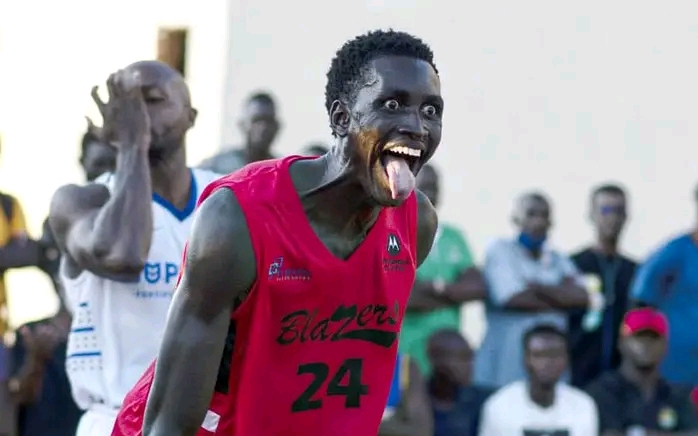 Nam Blazers handed out minutes to new additions David Deng Dikong and Carlos Ochi in a friendly match against KPA at Lugogo.

Kenya’s KPA visited Uganda as part of their Preseason Tour in preparations for the tip off their National League.

And Nam Blazers, who are also preparing for the start of the second round, managed to emerge victorious in a closely contested affair.

Dikong returned to the side after missing the first round due to his engagements with Cobra basketball club in the Basketball Africa League.

New signing Carlos Ochi made a cameo of two minutes.

Ochi who played for Falcons and Warriors about 10 years ago before leaving the country, was also part of the Uganda squad that represented the country at the 2008 FIBA Africa U18 Championship in Alexandria Egypt.

The duo – Ochi and Dikong – are expected to play a vital role as Nam Blazers mount a strong challenge in the league come second round.

There was less to admire from either side, and the two can be forgiven after all it was just a friendly.

But Nam Blazers will take the credit for the victory against a KPA side that last month dethroned Ulinzi Warriors to win the Kenya League at Nyayo Gymnasium.

Nam Blazers quickly got off the blocks to lead 22-11 after the first quarter, the match was tied 22-all midway through the second before the Blazers opened a six-point gap, 30-24, at halftime.

Third quarter ended 44-40 and it remained a close tie from thereafter before the Kenyan side tied the game 57-57 with just few seconds on the clock.

And then Amisi ‘Carmelo’ Saidi scored a floater to give Nam Blazers 59-57 up.

KPA almost won it at the death with Victor Odendo’s three-point attempt, but his effort rimmed out before the Visitors fumbled with the ball as the click expired.

Carmelo finished the game with 18 points and 8 rebounds, Ariel Okall had 13 points and 9 rebounds while Paul Odong had 14 points for Nam Blazers who made 25 turnovers!

Brian Shivachi, formerly at Power in NBL, finished the game with 17 points while small forward Kennedy Wachira who was Kenya League MVP last season, had 13 points.