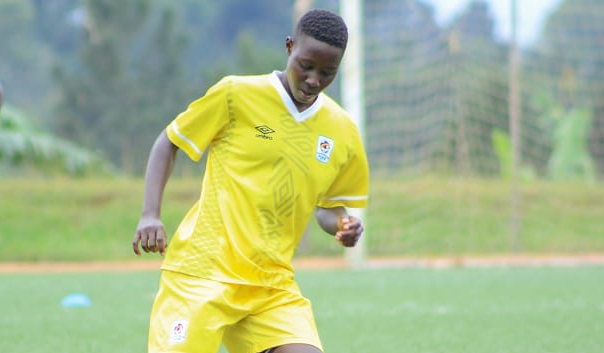 Crested Cranes and She Corporates midfielder Phionah Nabbumba expressed her delight about being recalled on the national team.

Nabumba, who was named the Most Valuable Player for the just concluded Fufa Women Super League made the remarks on Wednesday.
She is part of the Crested Cranes team that is gearing up for the Upcoming Cecafa Women’s Championship that is to take place at Njeru next month.

It’s been a while ever since Nabbumba was called up at the National team.

But following her recent superb performances this season at her Club, She Corporates, her national team call up was inevitable.

She scored five goals and made seven assists to guide She Corporates to this year’s 2021/22 Fufa Women Super League title.

“Im so happy and glad to be given that opportunity to be recalled on the national team once again, Nabbumba told the pressmen on Wednesday.

Upon her arrival, Nabbumba has vowed to help the team score and make more assists in the upcoming tournament, given the fact that she has been at the same stage before.

“Am ready and my target is to look for goals and make as many assists more than the previous Cecafa tournament I played in 2018 in Rwanda where I made only one assists, I’m going to double my efforts as we keep eyes on getting out of the group stages in the Upcoming Women AFCON finals in Morocco this year in July.

This year’s CECAFA Women’s Championship will kick start on 1st June till 11th the same month at the Fufa Technical centre in Njeru.

Uganda, who are the hosts are dipped in group A alongside Rwanda, Burundi and Djibouti. The Crested Cranes will take on Rwanda in their first group game on Wednesday 1st June.

And Nabbumba, given her experience and composure in midfield, she will be hoping for a better tournament to help the Crested Cranes as they gear up for the final Total energies Women Africa Cup of nations championship in Morocco this year in July.