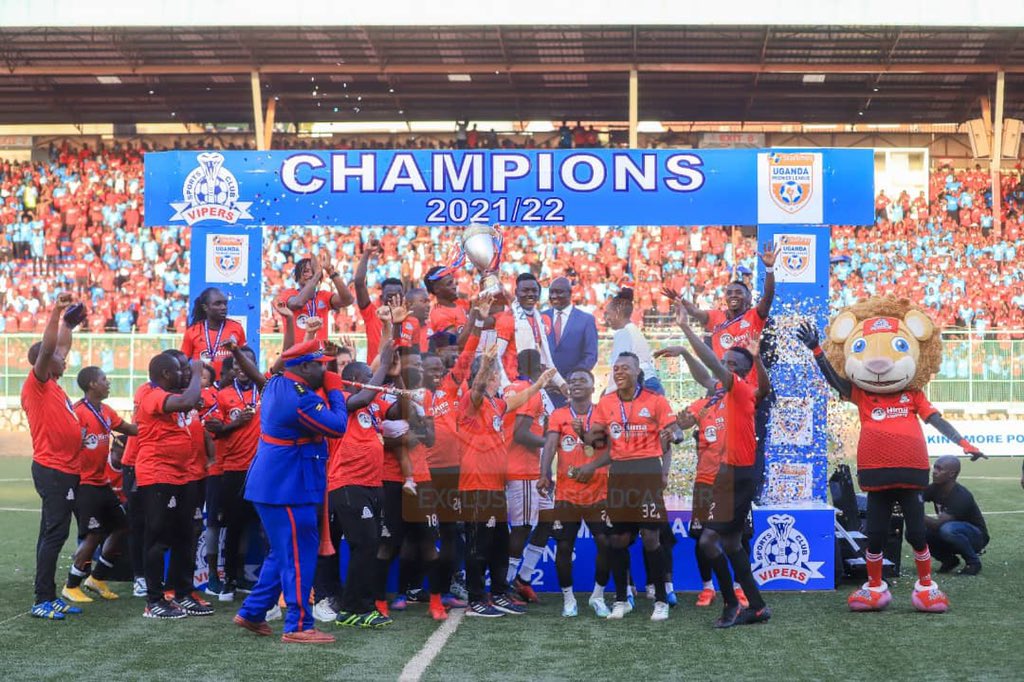 League Champions Vipers SC wrapped up their fruitful season with a deserved 5-0 win over Police FC in their last league game of the 2021/22 season at Kitende.

A brace each from Milton Karisa and Bobosi Byaruhanga, and one goal from Yunus Sentamu ensured that the Venoms sealed their fifth title in style.

The win saw Vipers finish on 74 points, and picked the 23rd win, an indicator of how good they have been this season. They have finished on top, 18 points clear ahead of second placed KCCA FC, who lost their last game against Wakiso Giants on Saturday.

It was a joyful day to remember for the Vipers faithful, who came in large numbers as their side were handed the 2021/22 league title.

As well, it is a plus to Brazilian Coach, Robertinho Oliveira on his first time of asking.

On the same day, Police FC Captain Tonny Mawejje, was Honoured in the sixth minute of the game, to mark the end of his Football career.

Against an already relegated Police side, it was business as usual for Vipers and they started straight away.

Karisa put them ahead in the 6th minute of the game to send the home fans into wild celebrations. After his goal, a moment was observed in honour of Police FC Captain Tonny Mawejje who was playing his last game.

The Venoms, who were dorminant has plenty of chance to score more but Yunus Sentamu and Halid Lwaliwa failed when infront of goal.

At the restart, Karisa doubled his side’s lead in the 52nd minute, scoring from a rebound after Bobosi Byaruhanga’s initial had hit the post.

Two minutes later, Bobosi made it three with a fine finish before completing his brace in the 71st minute.

And Sentamu put the icing on the cake with the fifth late in the 90th minute to seal a deserved win for the Venoms.

The win saw Vipers finish with 74 points, 18 clear above second placed KCCA FC. They now book a ticket in the CAF Champions league next season.

The Venoms also have a chance to win a double this season as they face Bul FC in the Uganda Cup finals this season.

For Police who were already relegated, they finish in the 14th position with 28 points and will play next season in the Fufa Big league.