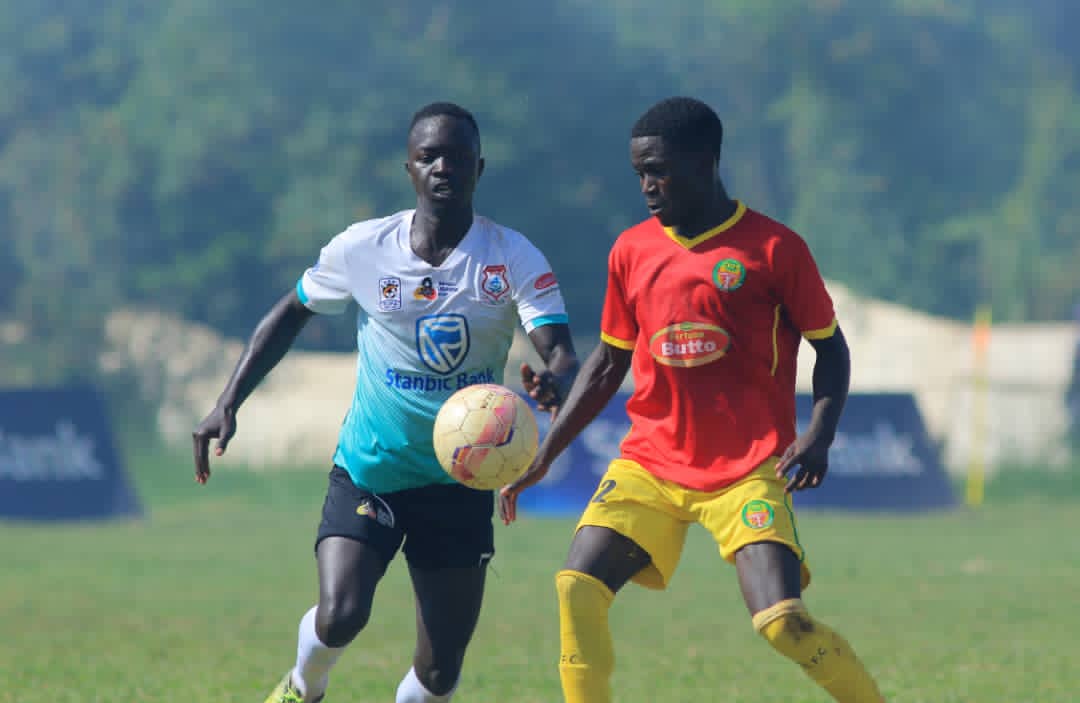 BUL FC put five past Booma FC to take a commanding lead in the semifinals of the Stanbic Uganda Cup.

The Visitors proved handful for the Regional League side and the gap between the two sides was well potrayed in the 5-1 scoreline.

Oketch Simon Peter scored a brace as BUL FC, while Richard Wandyaka, Ibrahim Kazindula and Karim Ndugwa added a goal each in Masindi.

“It was a good game on our side, we could have sored more but we played a slow game,” said BUL Coach Alex Isabirye.

“But I must give credit to Booma FC, they are a good team with still young players and will be a good force to reckon in future years if they stay together.

“This tie is not over yet, everything is possible in football. Our focus is on Police game though. We will think about the return leg when we finish Police in the league.”

Wandyaka scored in between Oketch’s brace and the tie was all but over just after 12 minutes as the Visitors led 3-0.

But Booma FC, cheered on by a big home crowd, gave themselves a fighting stance when Leonard Mujuwa pulled one back in the 21st minute.

But Kazindula restored a three-goal advantage just before halftime.

In second half, Ndugwa converted from the spot kick to decorate the scoreline as BUL, who camped in Masindi three days prior to the game, left smiling.

“We got challenges just before the game; Our main striker Kambale Adriane and Goalkeeper Anguzu Francis got injured in the last training,” said Booma Coach Alinaitwe.

“But we can still beat them and qualify, it’s a tough task ahead of us, we will rectify our mistakes and come back stronger.”

Not taking away much from Booma, but they had not faced a team as strong as BUL FC.

Their route to this stage saw them Nyamityobora, Kajjansi United, Tipsa and Maroons FC.

But in BUL, they were facing a UPL team for the first time in the competition.

And a side hungry for success having reached at the final last year.

BUL FC had a dream start when Ndugwa raced on a neat pass before cutting back on the byline to find Oketch who bundled home from close range in the sixth minute.

And Wandyaka scored a beauty four minutes on; he benefited from Booma’s inability to defend from a corner to send a ferocious effort that went in off the crossbar.

The third came in the 12th minute; Reagan Kalyowa picked Oketch who after a good control whipped in a volley into the top corner.

However, the hosts intervened; Denis Omedi made a strong run on the left flank to lay a cross in the area, and after two attempts blocked, Leonard Mujuwa was third time luck to score from a rebound to hand the home fans a reason to cheer on.

Kazindula then powered in a powerful volley, that caught the goalkeeper off his line to make it 4-1 at the stroke od halftime.

BUL FC were awarded a penalty in the 63rd minute after Isingoma Christopher pushed Emma Kalyowa, for Ndugwa to step up and send the goalkeeper the wrong way.

With a big margin lead, BUL FC will fancy their chances in the return leg as they seek a return to the final.