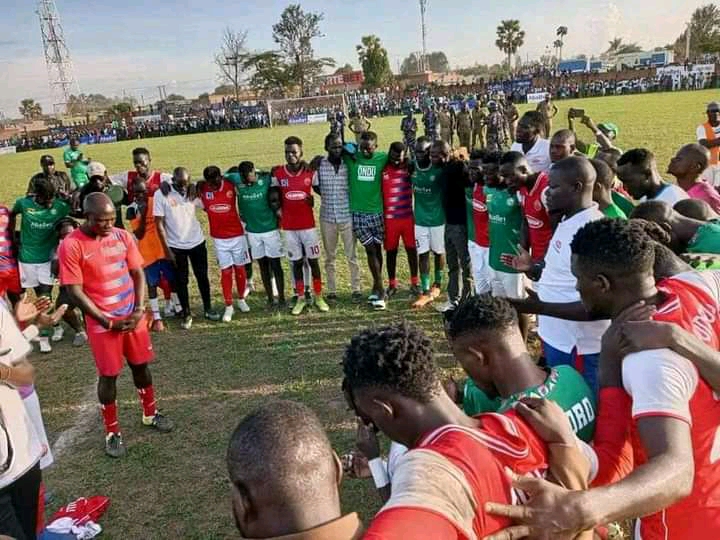 Onduparaka Fans President Jamal Ahmed has made strong claims against Arua Hill fans during their league clash in the league recently.

Jamal also added that the ugly scenes at the Ababet Greenlight Stadium against Arua Hill were a long term plan to spoil the name of the Club.

Onduparaka were silenced by their neighbours Arua Hill after a 3-0 victory in the West Nile Derby at the Ababet Greenlight Stadium on Friday, May 6th. Rashid Kawawa stole the show with a brace while Innocent Maduka scored his first goal for the Kongolo.

But the game was marred with hooliganism mainly from Onduparaka fans which lead to a couple start-stops.

Jamal claims that Arua Hill fans trafficked weapons in the stadium as they wanted to revenge for their destroyed fence in the first round at Barifa Stadium.

“Some came with pliers others came with axles, they were hiding them in their costumes, so when they started that I think they had to stop the match abit were people came to calm them”.

“They entered with weapons pretending to dress in cultural wears with spears, others threw their pliers over the wall as the security was busy checking others through the gate, they created a scene where no one can realise they are smuggling weapons”.

“In the streets what they even told people before and after the match was that Onduparaka fans broke their fence in the first round so they had to reciprocate or pay back that’s why they were acting in that manner”.

The president narrates that some Arua Hill fans were putting on Onduparaka jerseys so that they can start chaos that will be planted on Onduparaka.

“Some Arua Hill fans camouflaged in Onduparaka jerseys and infiltrated themselves between Onduparaka fans and incase of any slight mistakes they throw bottles, stones inside the pitch, now since they were putting on Onduparaka jerseys the media and all those who have been wishing unwell for this club they could boldly say it is the club doing that”.

“When we were preaching about peace, togetherness, unity and the importance of this Derby to West Nile in general but again when these fans started this behavior it was now hard to acknowledge whether they heard us preaching this or the representatives with whom we went with to radio really briefed those fans”.

During an exclusive interview with The-SportsNation, Onduparaka Fans President Jamal added that they condemn any form of hooliganism because they have always fought it.

“First of all we condemn any form of hooliganism as Onduparaka fans in the strongest way it deserves and we have done alot to see that our fans always remain calm and peaceful regardless of incitings by the certain elements of the game'” Jamal told The-SportsNation.

“As Onduparaka fans Chairperson, I can boldly tell the world out there that all these things we premeditated, planned and choreographed to tarnish the image of Onduparaka and the fans”.

Jamal adds that they are some forces that wants Onduparaka to perish.

“Because why would such a contested match that the whole country was watching be put to shame by even those who hosted it, I think it doesn’t add up and even beside that their people who have been dragging this club by neck to see that it’s reputation, respect and everything it earned be put into waste so we are not moved by such allegations much as we condemn hooliganism in the strongest term it deserves.

“First of all, Onduparaka fans have the strongest and disciplined structures more than any other club’s fans set up in this country.”

According to the President, they preach peace and discipline to their fans and whoever violates it is heavily punished.

“When we preach it reaches all the fans because we have very many forms of preaching, we have indoor, outdoor, social media, radio programs, we even have open sensitizations, so any fan who breaches this and is got most times faces severe punishments and we don’t joke because the constitution empowers us not to take indiscipline of fans lightly.”

“Therefore due to the highly contestation that surrounded the Derby, we are saying that since everything was planned it became hard for us to ascertain whether it was our fans who did that or not.

Jamal admits that there sensitizations about peace and unity didn’t yield any fruit because the hooliganism was scripted.

“That’s why with almost nothing we still survive, we still move on and the love is endless and constant it keeps having positives everyday and I can boldly tell the public that the more they tarnish the image of the club the more God makes people love it, the love for this club is beyond and that is what pains some people It’s still not too late we need inclusiveness and oneness in this”.

“But what I can tell the public boldly is that no fan of Onduparaka wishes to do something to tarnish the image of the club that can cost the club therefore all these were built up.

“Most definitely, these incidents were planned you can see directly that even during the first half one of our players (John Rogers) was attacked when he was taking a throw in and immediately when Arua Hill scored the first goal instead of the fans celebrating their goal some were busy plucking off the fence others were pushing it seriously.”

As a way of promoting unity and peace, Jamal says they had planned to have a friendly between the two fans before the Derby but Arua Hill failed to buy their idea.

“I can also tell the public that on 20th April prior to the Derby we came up with an idea that let Onduparaka fans build something that can bring them together so that we can sensitize ourselves”.

“So I wrote a letter to Arua Hill fans department requesting for that engagement interface, basically we were supposed to have a friendly match that will bring us together and sensitize ourselves about the importances of being in the same city, having a Derby and rivalry how we can bring the positive part of it to benefit both clubs”.

“Indeed our colleagues from Arua Hill also replied and said we need to put that letter in full details, so we came back because we badly need the peace, togetherness and inclusivess and also as the mother club we drafted the letter into details and sent it back but they went mute, they failed to reply the letter”.

“And indeed everything that we wanted to talk about and sensitize people about in the letter they failed to reply, that’s exactly what happened at Greenlight in the Derby”.

“So we are saying that all these things were pre planned because if we had that match indeed we were going to take an oath and agree that there will be no hooliganism in this and whoever does this shall be reliable to punishment from both sides”.

“So the failure to reply that letter already proves that they had intentions for that violence, inhumane acts and I have evidences of the letters I wrote to them and I think anybody in a rightful shape of mind will know that truly we had tried, even on radios, TV everywhere we preached peace and unity”.

“And when we went to the TV, they didn’t turn up, they brought someone I don’t know whether the person was in their department or not, it’s something we shall find out but we were told the person who represented them was an employee of that TV, so such things really can’t add up”.

“Some of the photos they circulated on the media were of accident victims and one of the victim’s parent came to us and said it was an accident, they don’t want the name of their son to be put to tarnish the image of something that is publicly loved and thats no other than Onduparaka FC”.

Most people refer to Onduparaka fans as Hooligans and Bad losers but Jamal refutes the allegations.

“All these events started building up from losing controversially away to Busoga united were our two legit goals were cancelled, awarding three penalties to Gadaffi FC they were alot of build ups and they decided that they needed to protest”.

“If protesting is what they call hooliganism then I don’t know, we protested and indeed those complains are not only Onduparaka fans, the complaints of poor officiating has affected almost all clubs”.

“It’s only these top clubs who think they are financially okay who manipulates referees to officiate matches in their favour and almost all these clubs who financially cannot match the top clubs have suffered and faced alot not only Onduparaka”.

“But that protest attracted attentions of very many people, they came in to find out what was really happening and indeed you saw the referee was subsequently found to have been wrong and its not only him very many referees not only Onduparaka matches”.

On whether the actions will cost the club, Jamal says that was their opponent’s wish but they have left everything to God.

“First of all our opponents characters, their planned move were to have something like that so that it will cost the club but the God we serve doesn’t sleep, he will stand and lead us and whoever planned this God will expose him or her”.

“In this club, there’s nothing you will do behind the scenes and you will go free, let the public know this from us, you will not harm this club and you go free, God will atleast expose you some day”.

“So in all these things, the FUFA representatives were there they also saw what happened and they saw how these fans started even how the violence outside the pitch especially at the VIP section because it reached a time when these same people entered there camouflaged to be fans of Onduparaka claiming to throw stones but they were targeting our VIPs to the extent that our VIPs covered their head with the chairs”.

“We knew something like this would happen because a lot of people these days camouflage and some already showed it on their social media that they wish bad for this club that’s why all these events are coming in, these events were beyond the ordinary eye of a human being they are things that were dark, this was a long time plan”.