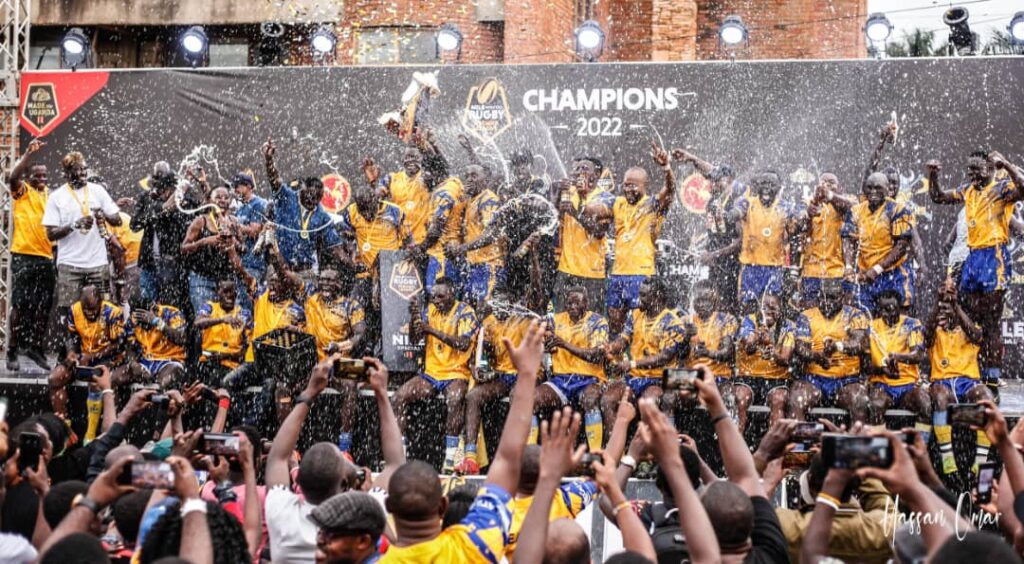 Heathens were on Saturday crowned champions of the 2022 Nile Special Rugby Premier League at Legends.

The ‘Yellow Marchine’ cruised to a deserved 22-10 win over rivals KOBs to finish the season unbeaten – with 87 points!

Coming into Saturday’s game, Heathens had already won the title with a game to spare but it’s their unbeaten stake that was on the line.

Visiting a defending Champion, Heathens were slow starters and trailed 03-00 after KOBs went for points when they were awarded a penalty for Josiah Ssempeke to split the uprights.

But Heathens responded quickly, and with a bang; Nobert Okeny Sexton crossed over for their first Try.

Innocent Gwokto found space in KOBs defence to score the second try before Chris Lubanga added the extras, Scott Oluoch added the other try for Heathens to take a commanding 17-03 lead at the break.

Romano Ucu extended Heathens lead with a Try from a moving maul and a late rally from the hosts was rewarded with a Penalty Try but it proved little too late as Heathens finished unscathed with a bonus point as well.

And the final whistle was greeted with euphoric celebrations as fans who marched to Legends in procession with a band before kickoff, then stormed the pitch to congratulate the players.

Heathens players were given a guard of honour by KOBs players on their way to receiving the title, handed to Team captain Michael Wokorach by NCS Chairman Ambrose Tashobya.

And the trophy celebrations, ignited by Nile Special, continued throughout the night.

It is strong to note that KOBs also won last season’s title unbeaten but the league was played under one leg!

Pirates finish the season in second with 77 points as KOBs settles for third place with 72 points.

Warriors are relegated to the second division after finishing bottom of the 10-team pile, having won once in 18 games!