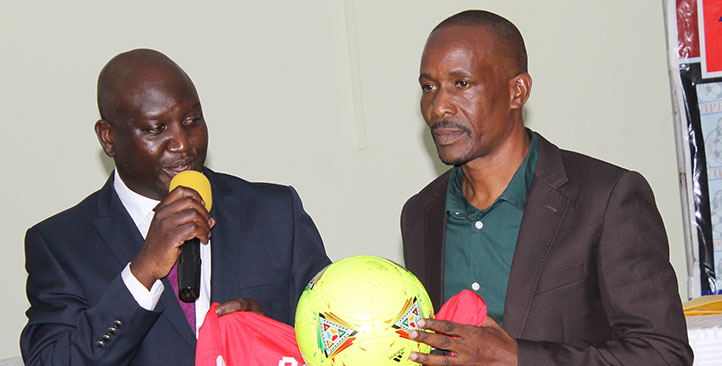 Coach Abdallah Mubiru has opened up on his life at Police in a wide ranging interview with The-SportsNation in the wake of his sacking.

Mubiru was shown exit door with the club citing poor recent results that have left the side on the edge of an abyss.

The decision ended Mubiru’s reign at Police which started in December 2016 when he replaced Sam Timbe, then helping the club beat relegation that season.

He quickly made Police a title contender on various occasion and his brand of tik-tak football was admired throughout the country and earned him a Cranes job.

‘’My ambitions included winning the league title with Police FC but I cannot say that it was their target. By the time I joined them they were struggling to beat relegation; nothing was done, apart from changing the coach, showed that they wanted to win the title. All other factors remained constant when I joined,’’ Mubiru narrates.

‘’That’s why we could lead the table after first round but we flop in the second round because there was no deliberate intention and plan to win the league, but they were our goals as the technical team. We thought that by doing better, we could entice the administration and the top management of Police the force to inject more money and pick more interest into the club.

‘’I have been always telling them that Police FC is their biggest tool so they needed to nurse it very well so that it can bear fruits for them unfortunately there was a link missing between the team and the force, and a lot has to be streamlined for the top management to know.’’

Mubiru admits that he leaves as a changed person, much improved coach as compared to the time he joined six years ago.

He adds: ‘’I have improved in so many areas like crisis management, tactically. I have learnt to work with very little resources and tried to achieve.  I leave with a lot of experience and there have been a couple of lessons learnt.’’

Mubiru’s time at Police was not all rosy to say the least, working under limited budget amidst insufficient funding from the Force.

‘’I always look at positives at whatever situation, and for all that happened, I am happy that have been able to carry that weight and to a certain extent been successful until towards the end,’’ the gaffer adds.

‘’I look  at it as an opportunity rendered to me to serve under circumstances that were on ground and like I mentioned I have to say that I learned a lot and that experience will be beneficial to me in future engagements.’’

Mentioning his top highlights at the club, he reveals; ‘’Moments when fans of rival clubs came to watch our games and left happy because of the brand of football we played, that gave me a lot of joy. There were Moments when the Police band came to show support to the team. There was a day when there was a lot of tear gas in town, and the band came to our game, they played their music and fans danced to their tunes in the stands on the day you expected them to be mad about Police force.’’

The tactician reveals that he leaves Police with some unpaid arrears which is not a surprise.

‘’With Police, it’s as if it’s normal for someone to be with unpaid arrears, it’s something I have lived with for the last six years. Many players have left demanding the club so it’s not news. But I will follow the right procedures to demand what is mine.’’

Mubiru, quickly linked to URA FC, says he is not taking a sabbatical and wants to return to the job soon. However, he targets a top team that is targeting for a championship.

‘’I am praying to Allah to guide me and get a job and I am ready to go and get a job immediately, I don’t think I need to rest at this time. I am ready to go out there. I am eager. I will need god offers; it’s my dream to join title contenders of the league because my dream now is to start winning titles. I have groomed players and technical personals.’’