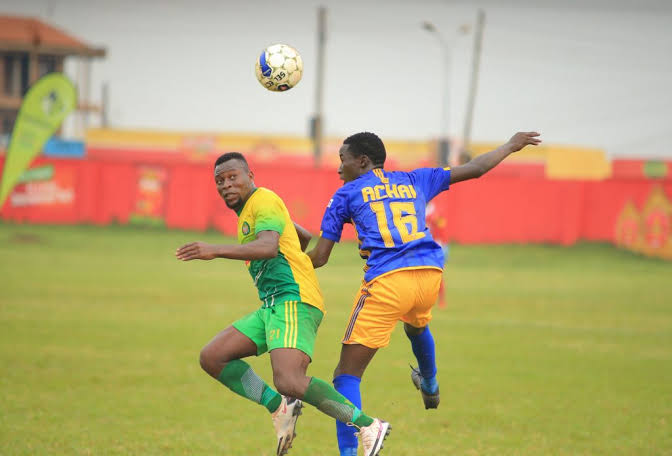 BUL welcome back defender Walter Ochora from injury who expected to feel the void of Ibrahim Kasonko who picked an injury in their last encounter, joinibg Simon Peter Oketch who is still in Sick bey.

Captain Saidi Keni who returned from long turn injury and Ibrahim Kazinda will require late fitness test to make to the bench.

Visitors will be without Strikers Aheebwa Brian who pick a knee knock in last game, Charles Lwanga who is engagement with St Mary Kitende in USSSA game and Sadat Anaku who accumulated more yellow cards.

The Eastern Giants BUL FC will be looking to leapfrog KCCA in second position when when the two sides meet in UPL early kick off at Kyabazinga Stadium in Bugembe.

BUL are 3rd on the log with 44 points, just two behind second placed KCCA, and a win will not only leapfrog KCCA but it will also be a revenge served following a 3-1 defeat in reverse fixture at Lugogo

And coach Isabirye is sure of that.

“KCCA is better than us, they are above us with 2 points, so the game will not be easy but am sure we are going to get three points,” Isabirye said.

“We are building a team that will be capable of winning trophies in two season from now, so expect a very good game.”

BUL are unbeaten in their last five games, coming at the back of two back to back wins against URA and Gadaffi.

They are unbeaten at home since their February 1-3 loss against Vipers, which was and still their only second loss at home this season after losing 0-1 to Express in their second league game in October last year.

KCCA will be looking forward to at least maintain a top two finish after their first loss at home this season in their last game against Vipers, a result which crippled their slim chances of winning the title.

“BIDCO are on a good form, they have been winning games, We need to improve so that we maintain the position we are in, we wanted to be table leaders by now but things have not gone our way,” said KCCA FC coach Morley Byekwaso.

“So now we need to defend our club, our badge, we need to play well to see that we come back successful, so we have to maintain what we have right now, as we keep pushing.”

KCCA FC have been one of the most inconsistent sides, they have only managed one win in their last five games, which was a 3-0 victory away at UPDF.

Which was also their first and last away win in nine visits, before UPDF Win, the Kasasiro boys had last won away from home in late November, beating Arua Hill.

They have four away wins this season including 3-0 against Wakiso and 1-0 against Busoga in opening stages of the season.

This is going to be the 21st league meeting and KCCA lead the tie with 11 wins to only BUL’s three wins.