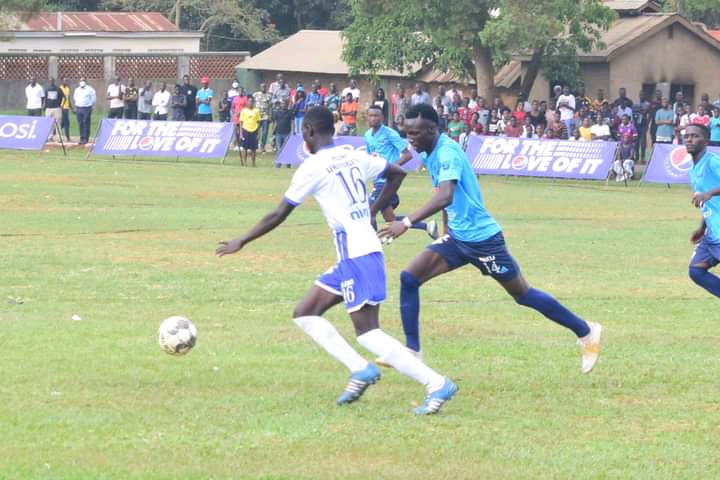 Entebbe based Nkumba University got off the mark with a comfortable 2-0 victory over Arua based Muni University in the University Football League played in Entebbe.

Abishai Felix first half brace was enough to separate the two sides as Nkumba got their season underway on high in their search for a maiden trophy.

The two sides were hungry for an opener and the first clear cut chance of the game fell to the visitors with Odong powerful strike from Murungi Cross couldn’t trouble the Goalkeeper before the forward again had a sight on goal this time Lubega was equal to the task at the near post.

Despite being on the receiving end, Nkumba University broke the deadlock through Abishai Felix with a near post header in the 13th minute after a fumble from a corner.

The hosts settled in the game after the goal with Boko Bage forcing Ocen Moses into a smart save before his low shot was deflected for a corner as they were pressing for the second goal.

Boko Bage could have doubled the host’s lead but he missed from 18 yards after a well timed cross from Kimera.

In the 42nd minute, Abishai Felix doubled the host’s lead tapping in past a helpless Goalkeeper from a Boko pass following a counter attack after the visitors freekick was headed away.

Nkumba University went into the break with a smile as Muni University hope to improve in the second stanza.

The hosts were hungry for more in the second stanza and could have doubled the tally but Isooba couldn’t get the shot away following a Mukhwala low ball to Boko who found Ocen.

The visitor’s lost the ball to Isooba in a dangerous area who passed to Abishai and found Otema but his shot was blocked.

Ogen Nick left foot effort at the edge of the box went wide as the visitors searched for a consolation.

Boko once again found Abishai but the goalscorer saw his effort go wide at the far post before Goalkeeper Lubega made a fine save to stop the visitor’s freekick.

Nkumba University moves joint top alongside MUBS with three points and two goals after one match while Muni and UniK are bottom in Group B.